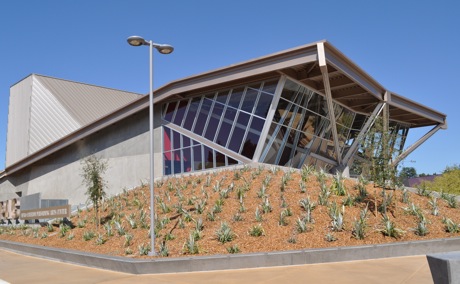 Update: Local newspaper Almanac New has a great cover story on  this weekend’s opening of MAPAC.

Originally posted on 9/20/09: Finishing touches are underway in advance of the opening of the new Performing Arts Center at Menlo-Atherton High School the second weekend in October, highlighted by a performance by Music@Menlo’s Artistic Directors, cellist David Finckel and pianist Wu Han, and special guest Anthony McGill, principal clarinetist of New York’s Metropolitan Opera. The center – built in collaboration with the City of Menlo Park – includes a 492-seat theater, lobby, box office, rehearsal and practice rooms, and stagecraft workshop for production of scenery and props.

According to Sequoia Union High School District spokesperson Bettylu Smith, the 31,000-square-foot, 65-foot-high building is inspired by the beauty of the historical grove of Valley Oak trees on campus and has been carefully designed and landscaped to create a tree house-like environment and the impression it is following the contours of an already existing hillside.

The new center also  incorporates a range of energy efficient and sustainable features, including a heating and ventilation system that permits only specific zones to be heated or cooled as needed; an unconventional air distribution system that cools from the bottom up (to avoid unnecessary cooling to the rooftop); use of shaded glass and deep roof overhangs to reduce solar load on the building; and extra insulation to avoid heat loss during winter and heat gain in winter – all of which add up to less energy use than similarly sized buildings.

[Update 12/18/09: Thanks to a comment below from Craig Hodgetts we’re reminded that his firm, Hodgetts + Fung, should be credited as the architects of this superb facility!]

Hi – nice page. We’d love it if you could provide a link to our site as we were the architects, and its a little weird to see everyone else credited.

Thanks for commenting! We just updated the post to include a link to your website. Great work!