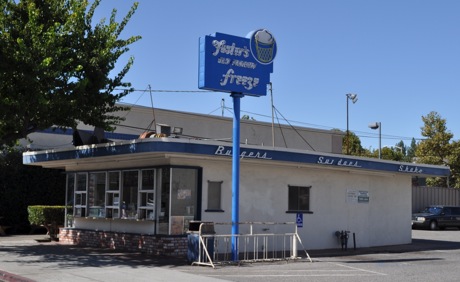 Three years after  a petition containing hundreds of signatures was presented to the Menlo Park City Council to avoid its demolition, Foster’s Freeze is still standing and doling out soft-serve ice cream, much as it has for the past six decades.

To graduates of Menlo Atherton High School of a certain generation, Foster’s Freeze was the teenage hangout, along with the edgier and  bit mysterious Johnny’s Smoke Shop located next door (what did go on in that backroom?).

This frequent patron from those long ago days can still remember her favorite shake – chocolate chip, which was made by pouring hot chocolate down the sides of the stainless steel shake container, adding the ice cream and putting the concoction on the shake maker, which cut up the now cooled chocolate into bits. Very tasty!

A great spot on a warm sunny afternoon for that “ice cream” cone pick me up! Foster’s is just a stone’s throw from my office – and always tempting!

I remember a few years ago when the Chevron gas station next door was rebuilt and ended up being higher and blocking the Foster’s sign. I seem to recall there was an agreement that added a pointer to Foster’s on the Chevon building and moved the sign to the other side of Foster’s – as seen in this photo.

I lived in Menlo Park from 1957 to 1966 at 1925 oak avenue.
In those days Foster’s Freeze had dip cones and they were my favorites.
Johnny’s Smoke Shop had a large selection of “men’s” magazines and the clerks were always shooing those of us who were underage away from them.
Kepler’s books was on the other side of the street, and some of the patrons were Beats (Herb Caen created the name Beatnik). There was a fast food Hamburger restaurant about where Keplers is now

The fast food hamburger post where Kepler’s is now was called Jiffy’s and offered 19 cent burgers.

Wow, 19 cent hamburgers! Those were the days!

When I first came to Menlo Park in the mid-90’s, I remember Kepler’s being across the street and down El Camino across from where Cook’s Seafood is still today.

I worked at Foster’s Freeze from 1964-1965. Frank Pearson was the owner that we had known since the mid 50’s. This was before food was served here. While I worked there, Frank and I worked on setting up a Hot Dog steamer and we made cold sandwiches on French Rolls. I also “invented” the Chocolate Banana Milk Shake. It became a favorite at the time. By the way, Johnny’s Smoke Shop was the place to go where us teens could buy our cigarettes and hang out playing the pinball machine. If anyone was around then, maybe they remember Norma that had worked at Foster’s for years.

I lived in Menlo Park on Peninsula Way from 1955 until I moved away in 1972. We sold the house in 2008 and it was torn down…another Eichler bites the dust…
I would go to A & W for bacon Cheese Burgers, Fries and a large Rootbeer and then across the street for a movie at The Park movie Theater and after to Fosters for either a Chocolate Malt or large chocolate ice cream cone dipped in chocolate!
We still have three Fosters Freezes in Santa Rosa…