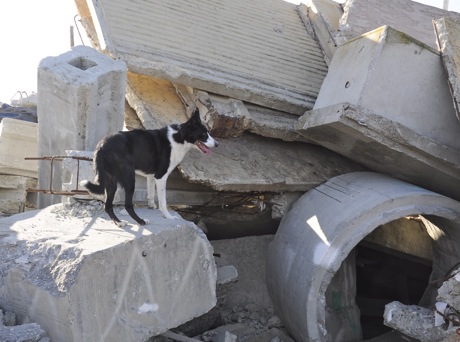 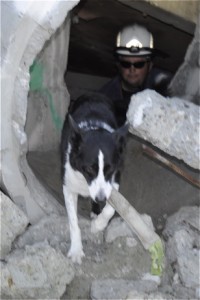 On a recent Thursday, Sweep, his handler Lynne Engelbert and a half-dozen other rescue teams were training at the 3-story high, acre-sized plot of collapsed buildings and smashed cars. The crews were swarming over the dangerous-looking pile of  loose, broken concrete and protruding rebar spikes in a drill that works like this: Volunteer ‘victims’ crawl into small spaces deep within the rubble pile. One by one, the rescue dogs are called by their trainers to search for the hidden victims. Having found a person alive, the dogs stand by and bark incessantly until a handler comes and releases them.

The dogs are trained to sniff out only live human scent, which Sweep, who has become famous in his field, did remarkably quickly, finding Jonathan Barnes, a member of California Task Force 4 (who also handles rescue dog Jeb) hidden in a tortuous crawl space about halfway down in the tumble. 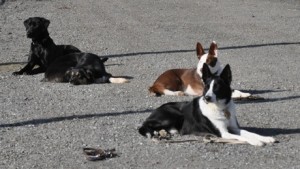 Search and rescue dogs are all business: when it’s not their turn they wait motionless, side by side, ignoring all distractions,: we watched Sweep, Jeb and two other trainees effortlessly endure a 25-minute ‘long down’ before they went into action.

Ms. Englebert, a certified Canine Search Specialist, is a veteran of disasters like the World Trade Center, the Oklahoma City Federal Building bombing and the Shuttle Columbia recovery effort. She and Sweep go wherever FEMA sends them, and were most recently on standby as Hurricanes Gustav and Ike swept into the Caribbean earlier this year.