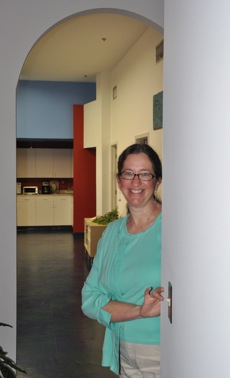 Celeste Baranski, CEO of startup Vitamin D, has an impressive Silicon Valley resumé. The Stanford EE grad has previously headed engineering at Palm and Handspring  as well as some very interesting startups, including GO and Grid Systems.  Baranski’s latest project, Vitamin D, is aimed at bringing the benefits of machine vision to the home and small business markets.

Vitamin D’s applications (which include a free version) can sift through video streams and identify things like people moving, doorways, and other regions of interest and then notify the user when certain events occur, for example, when a person approaches a door – perfect for webcam or surveillance video. The software also creates a daily “highlight reel” of events which is much easier for users to review than hours of tedious video.

One of the first applications for Vitamin D’s app was monitoring the fire door at the new M-A Performing Arts Center. The door can’t be locked for safety reasons, but the administration prefers that unsupervised students not congregate there. The school’s main surveillance system requires that someone continuously staff a console – not a productive task for busy office staff. The Vitamin D application helps. The school set up an inexpensive webcam that monitors the door, and Vitamin D software alerts staff  by email (complete with a frame grab of the activity) when someone approaches the door,or if students gather in a certain  area or other pre-set conditions are met.

Other beta users of the software have used it to, among other things, catch a pastry thief and a lazy, larcenous dog walker. A gardener uses it to alert him when hungry deer enter a prized pumpkin patch – and users are finding new and creative uses every day. Response seems to be particularly enthusiastic among small business owners who have used it to install effective, inexpensive security systems that help them shoo loiterers, catch vandals and stop pilferage.

Vitamin D is built on top of technology from Numenta, another one-time Menlo startup launched by Palm Founder Jeff Hawkins. Numenta is a “brain OS,”  that brings human neural processing to computers. In particular, Vitamin D used Numenta’s Hierarchical Temporal Memory and NuPIC software platform to  develop their machine vision application in 18 months. NuPIC applications are not so much programmed as “trained,” a very different paradigm for developers used to conventional programming methods.

“Numenta is going to change how computers are programmed in the future”  says Baranski.  “It’s brilliant – and practical – and we’re very excited about being among the first to bring a useful application to what appears to be a very large home and small business market.” She adds that Vitamin D is currently in the funding hunt, should any InMenlo readers be interested.

Just one question — why did she name it Vitamin D? I know it’s a miracle vitamin but still it seems a bit obscure. Let us know!

Hi Sara, Great question! When we started our venture about three years ago, we wanted a company name that could be (at least loosely) associated with the brain or intelligence, but we didn’t want some highly technical (i.e. nerdy) name up or a made-up word with lots of consonants. We also wanted something that had positive vibes for people (or at least not negative vibes). If you look at our logo (check out the link in the first post), you’ll see that the company name can be read as “Vitamin D” or “Vita Mind”. Besides this subtle “brain” reference, we like the positive associations that go along with “Vitamin D” – health, sunshine, etc. Last but not least we were able to get a trademark on “Vitamin D”, which we’re hoping will be a benefit as we start selling lots of product!

It’s funny, I was literally just thinking the other day that the an automated ‘highlight’ reel for surveillance cams must be possible now for home security, etc. And so it is!