Menlo gets a (brief) weather break 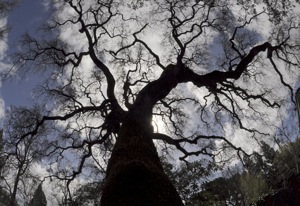 Call it changeable in Menlo Park today with white puffy clouds (here framed by a stately West Menlo oak) appearing between AM and PM rain showers. The morning precipitation burst brought .4″, bringing the year- to-date to 16.7″ compared to 13.35″ last year according to InMenlo rainfall watcher Bill Russ. In his update, Bill added, “Over the years my totals have run less than the SF Airport recording and higher than what’s recorded in San Jose, both of which are reported in the media daily. This year I am running ahead of the Airport.”