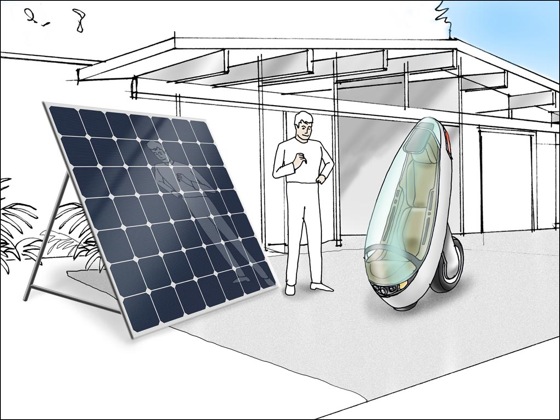 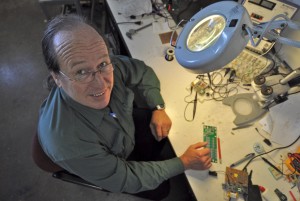 Twill Tech president Chris Tacklind (pictured) stands, for the moment, in the center of this landscape,  which could easily pass for the mad scientist’s lab in a sci-fi movie.  In the same same space also reside two singular creations known as Prototype Zero (in computer science the first element in a series is always 0 rather than one)  and Prototype One.

Neither prototype is ready for a public unveiling, but we can say that Zero resembles a tall pogo stick planted in a  skinny flower box. It’s only goal in life is to prove that it can – highly improbably, judging by its geometry – stand stably upright. Push it over, and it catches itself, springing back to a “standing” position.

Prototype One has wheels, motors, a seat, struts, springs and bundles of wire awaiting termination on a host of circuit boards. It looks more “aircraft” than “automotive,” with, perhaps, a bit of Rube Goldberg thrown in. This is Twill Tech’s vision of future transport – light, strong, green and able to withstand almost any crash with its passenger perfectly intact. The concept drawing (above) shows The Twill with all the power it will ever need to transport 92% of commuters to work and back.

Basically a two-wheeler, it can stand upright, even at rest, thanks to a steering motor and very sophisticated software that borrows a trick from the Segway Transporter. As its speed increases (to a planned 80 mph) the body automatically lowers to reduce drag and improve aerodynamics; acceleration will be a very fast 0-60 in six seconds. Advanced airbags and foam-pebble-filled seat cushions will completely immobilize the driver in the event of severe impact.

Tacklind hopes the day will not be far off when he can motor around town in the prototype. (Tacklind and his lab both reside in Menlo Park). Meanwhile, Chris, with family, colleagues, and students (he’s been a robotics mentor at local high schools for the past eight years) labor to bring that moment closer to fruition.