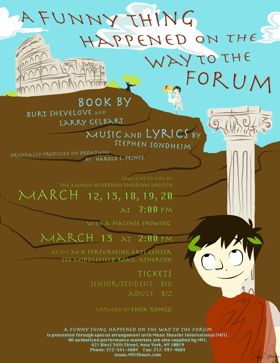 Did you know that Menlo Park boasts a state-of-the-art performing arts center? Here’s your chance to check it out.

The Menlo-Atherton High School Thespian Society along with members of the M-A Band (directed by much beloved leader Frank Moura in what may be his last public performance) is presenting  A Funny Thing Happened on the Way to the Forum for six performances only beginning Friday, March 12.

This laugh-out-loud satirical musical was originally produced on Broadway by Harold Price and features music and lyrics by Stephen Sondeim. Inspired by the farces of of the ancient Roman playwright Plautus, it recounts the tale of a wily Roman slave who attempts to help his master capture the heart of a not-so-bright young woman. Many complications ensue, not the least of which is the fact that some believe she’s already been promised to a Roman solider whose ego is out of control.