M-A grad travels the state to share a Common Vision 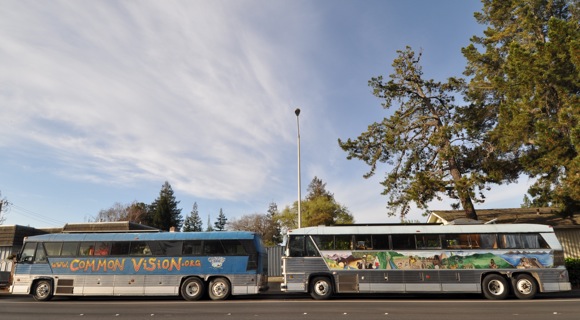 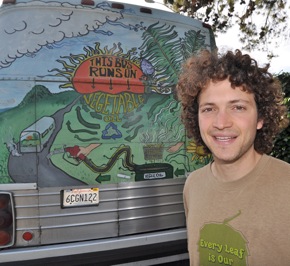 Menlo-Atherton High School grad James Most is one of 18 volunteers who are currently touring California as part of the Fruit Tree Tour 2010, a program operated by non-profit organization Common Vision. The group visits elementary schools, most of which are urban and under served, performing eco-theatre using props like an eight-foot long worm puppet. Kids get further engaged by participating in a drum group and planting fruit trees in the schoolyard.  Most stops on the tour also include tree planting at community gardens. In the last six years, the Fruit Tree Tour Program has directly impacted 45,000 students, transformed over 120 low income schools and community centers into abundant orchards, and planted over 3,500 fruit trees.

The entourage travels in the world’s largest veggie-oil-powered buses, which for the last two nights have been parked on the Alameda de las Pulgas in Menlo. The 2010 Tour is in the Bay Area for a week long series of appearances that began yesterday at the Full Circle Farm in Sunnyvale and concludes next Wednesday at Thousand Oaks Elementary in Berkeley. You can see a calendar of events here.