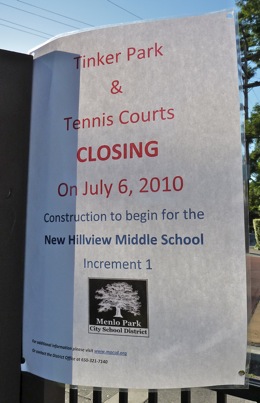 For all you Menlo residents who grew up going to Tinker Park – or who played as a youth on the Hillview School tennis courts – this weekend is your last chance to visit both. They’ll be closing on Tuesday, July 6 to make way for the construction of the middle school’s new buildings.

While many MP citizens have bemoaned the courts disappearance, it’s the tiny, 1/4 acre Tinker Park that’s caused the greater outcry. Maybe there are others like this poster who, thanks to her parents being just a stones throw away on Hillview Dr.,  took her young cousins to the park in the 60s and then her own son during the 70s – and finally her granddaughter in the last year. Yes, there are other newer parks for toddlers in town, but it’s Tinker that tugs the heart strings and provides the memories.

According to a report in the Almanac last fall, the school board has agreed to install a new, smaller Tinkers Park with funding from the city of Menlo Park as part of the school’s reconstruction.