The winning design team of Anne Schultz and Jina Choi 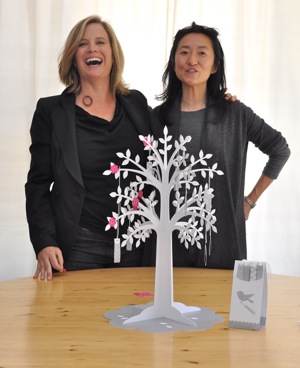 As reported by InMenlo in May, they came up a big winner at the National Stationery Show for their Wishing Tree (pictured). And this month their Sweet Stands made the cover of the annual kid’s issue of Donna Hay magazine.

Anne and Jina met at Klutz Toys where they designed the Chicken Socks books. Because they enjoyed collaborating and creating new products, it wasn’t difficult, from their perspective, to form their own business. Hello Hanna’s initial product was a line of children’s place mats; they then added books, followed by the Wishing Tree. They plan to expand into other paper good such as place cards.

“Everything we develop you can customize,” says Anne, “or just use out of the box.”

Hello Hanna products can be ordered online and area also available locally at Paper Source in  Palo Alta and at Draeger’s in Menlo Park. They’ll be appearing at the end of July at the Renegade Craft Fair in San Francisco.