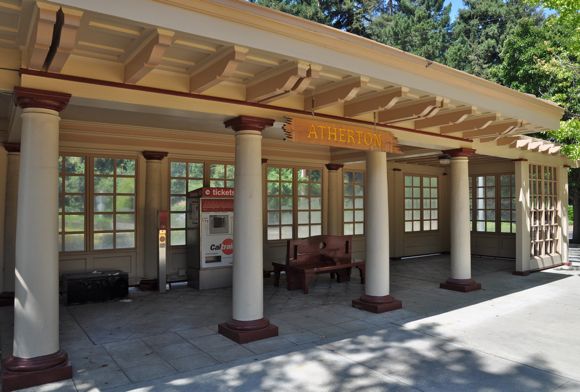 This InMenlo contributor grew up on Hillview Drive in west Menlo Park, and my father took the Southern Pacific (now Caltrain) commuter train every day to the City and back (except on weekends when he drove the company car home). On my 16th birthday, my mother handed me the keys to their huge Pontiac Bonneville and said, “Go pick up your father.”

I was extra lucky that night. He didn’t get off the train in Menlo. That meant he’d missed it and would be on the next train – the one that stopped in Atherton but not Menlo. (No cell phones to communicate the message – just family routine.) For new-behind-the-wheel-me that meant driving the couple of miles north on El Camino to the Atherton station.

One of the earliest stations between San Francisco and San Jose – originally known as the Fair Oaks stop – the Atherton station is now among the loneliest. It’s joined by Broadway in Burlingame as offering only weekend Caltrain service. Yet, there are those of us who remember when passengers ascended and descended its train platform with regularity – all wearing snap-brim hats and suits with tie – and 98% male.