Michele Santilhano: Endurance athlete to inspire us all 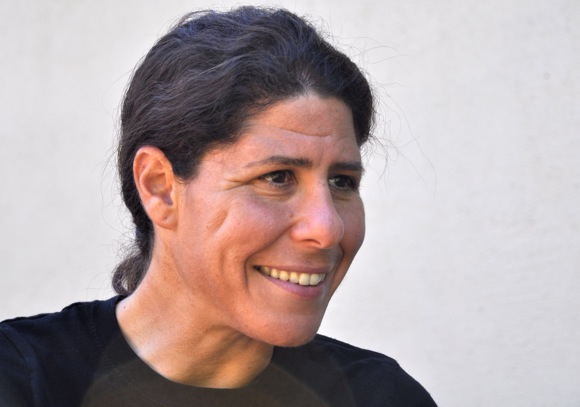 No cockiness. No arrogance. Just the most winning smile. And an enthusiastic invitation to “come sit out back and talk.”

The native of South Africa first entered endurance competitions as a runner and credits hikes around native Cape Town with parents as her earliest inspiration. She swam the English Channel and completed an Ironman triathlon before arriving in the Bay Area and joining Menlo Park-based Team Sheeper as a triathlete.

“Tim’s my inspiration,” she says of the team’s captain, Tim Sheeper. “He coaches with his eyes. He’s such a role model the way he balances work and sports. Plus, he’s a man of few words, so when he does speak you listen.”

The accolades go both ways: Tim calls Michele “the most inspirational athlete I’ve ever met.”

Tim participated in the RAAM as part of a four person relay. This year Michele decided to attempt it solo, and can now count herself among only 30 women who have managed to finish within the allocated time of 309 hours. Michele finished in 12 days, 19 hours (308 hours).

“The most exciting moment for me was when I got to Gettysburg,” says Michele. “It was there, riding through that fascinating countryside, that I realized I was going make it.” 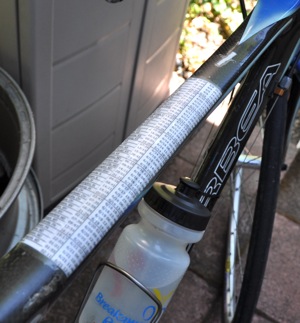 During the 3,000 miles ride, Michele slept about 90 minutes in a 24 hour period. She kept her goals easily in sight – taped to the frame of her bike (photo left). Her technical crew trailed her, and she raced during the night in the vehicle’s headlights. During last  36 to 48 hours – she’s not exactly sure – she didn’t sleep.

” RAAM  is the pinnacle of  endurance cycling,” she says. “Finishing it completed my resume for endurance sports.”

So what’s next for Michele, a pediatric oncology nurse at Lucile Packard Children’s Hospital when she’s not mentoring kids in the Building Futures Now program?

Having attempted Everest once, she’s thinking about looking upward and tackling the world’s seven highest peaks. “I’m an explorer at heart.” she says.

Thanks for great articles on Tim Sheeper and Michele Santilhano — and many others that I scanned on your newly discovered site. I think a great future story would be about Building Futures Now (mentioned in Michele’s). Basic background is on the http://www.buildingfuturesnow.org link you provide but what you may not know is that it was funded and founded by Menlo Masters and that many members of Tim’s teams volunteer as tutors, mentors and all-purpose helpers. There are now 3 ‘classes’ of children, 4-6th grade about 43 in total and several from the first class/cohort will begin private middle schools this fall (Eastside and Girls Middle). The executive director, Allison Upton Lopez, has led the program for a year+ now, along with her responsibilities at I Have a Dream, the parent non-profit with strong links to Stanford Graduate School of Business through founder Peter Dumanian. Tim and team have provided swim lessons, summer camps scholarships, monthly field trips, 1-1 mentoring while the program’s staff provides after school tutoring and a host of support services needed to ensure the whole child and whole family are engaged and needs met. … Thanks for generating good news that builds communities and inspires each of us