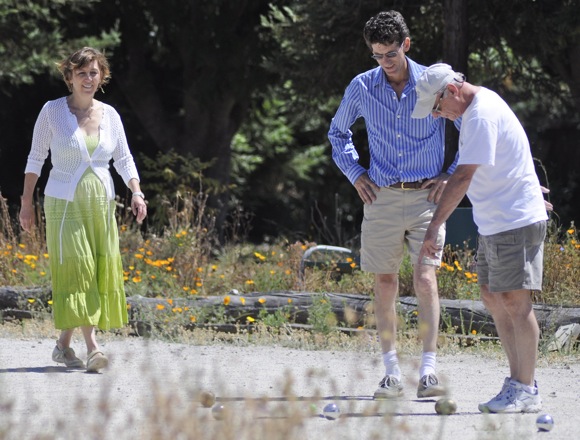 The Bay Area Pétanque Players gathered this afternoon in Flood Park in Menlo Park, as they usually do once a month, to play some casual games with two to three person teams at an event they dubbed “Pastis and Pétanque.”

“We’re a pretty eclectic group – French, Russian, Belgian, British and American,” said organizer Geoff Lewis, who explained the group has been playing at Flood Park for about two years. 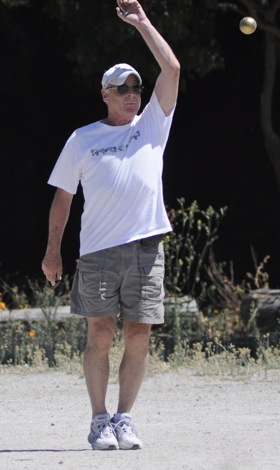 According to the group’s website, “Pétanque (pronounced ‘pay-tonk’) originated in Provence, France at the turn of the last century. It’s played with metal balls (boules) and, like horseshoes and bocce, is easy to learn and fun to play. You throw the boules while standing with your feet together in a circle. There’s a small wooden target ball (the cochonnet), which you have to get as close as possible to. What makes the game so appealing, is that you can be way ahead for a while, yet lose a second later, or vice versa. Nothing is decided until the last player plays the very last boule. If he or she moves the cochonnet or hits an opponent’s boule out of the way, the layout of the boules – and thus your score – can change dramatically.”

Pastis, for the unfamiliar,  is the traditional drink of pétanque players. It was available for purchase during play, and the group planned to go on to a Peninsula Friends of Europe gathering at Bella by the Bay in Redwood City.

Flood Park’s Pétanque Court may not be in the best of shape currently but the group’s long range concern is the loss of the court completely, when the park is closed in September and work begins on an upgrade to the adjacent San Francisco Public Utilities Commission water supply pipeline. “We worry that when the new pipeline is complete, the court won’t be restored,” said Lewis. Flood Park is not scheduled to reopen until June, 2011.

It is spelled PaStis and not Patis.
Thanks
Serge