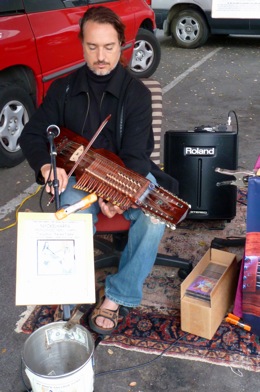 We didn’t catch the musician’s name, he was so intent on playing his nycelharpa (prounounced neekil-harpa), a Swedish instrument that dates back to the 1400. It was the first time we’ve heard this instrument, which emanates a  “distinctive ethereal and otherwordly sound,” at the Menlo Park weekly farmer’s market. The nycelharpa is bowed like a violin with three rows of keys run along the neck. Tapping a key moves a wooden dowel which in turn hits a string. While there are 16 strings, only four are played, producing its distinctive music.