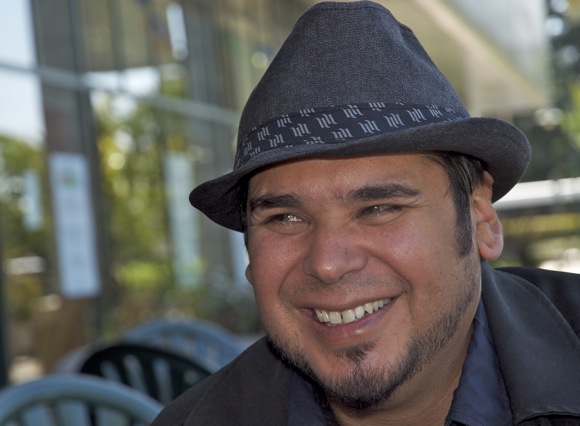 John Ray Gutierrez dreams big. A few years back, the actor who now views himself as more a director/screenwriter, went on a quest around the world to make an indie film. Today he’s working hard to bring Menlo Park-based startup Big Burrito Media to life.

“Our vision is be more interactive than Facebook and YouTube,” he explains. “We want to feature a lot of story plots – from preschool to mature audience – and involve the community in advancing the plot. Everyone who contributes will get credit.”

Currently Big Media Burrito features the many book trailers he’s done for Kepler’s in Menlo Park, where he works. The Death of Bunny Munro was nominated for a New Covey Award and features John Ray as the bartender. (Locals will easily recognize the locations.) Future plans are to include film, web series and animation on the site.

Despite his world travels and early acting aspirations, the Bay Area native has kept close to his roots. One of his earliest works was a Palo Alto-based cable access show called The Gen-X Show he co-produced, co-directed and c0-acted with Danny Briones, who is still his creative partner. A mix of entertainment and news, the show earned a Bay Area Cable Excellence nomination and a loyal following. “We got a couple of nibbles from Hollywood,” he says, “but ultimately it didn’t go anywhere.”

Hey thats great JohnnyRay,Im working on getting a passport for tiwain,See you there!

Hey cuz how exciting your life has sounded ! We are both from a small town and we never expected to ever move out ha! Congratulations on your lifes success. Hope to see you and your moves soon remember to add Gilroy to your movies.