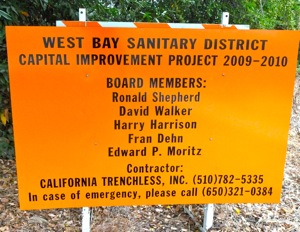 First came the letter to residents alerting them that construction would soon commence on a new sanitary sewer pipeline. Then came roving surveyors who left marks on the soon to be dug up pavement. That was followed up by a sign stationed at the Sand Hill Road end of Oak Avenue in west Menlo Park.

According to the West Bay Sanitary District, construction, which doesn’t appear to have actually begun, will be ongoing through mid-December, during which there will be “temporary disruption to your sanitary sewer service while the new connection is made. Each connection is expected to take approximately one hour.” Translated – no flushing. The District did say residents would receive 48 advance notice.