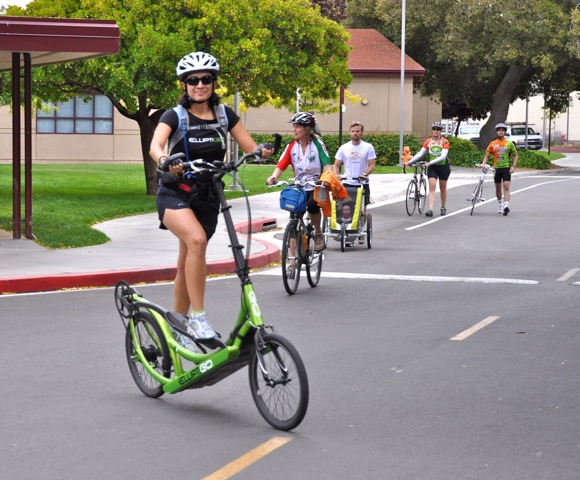 Among the 500 or so riders gathered Saturday morning to take part in the Tour de Menlo, a charity ride organized by the Menlo Park Rotary Club and the Almanac News, was Anamaria Nino-Murcia on her Elliptigo 8S. The combination bike/elliptical machine, which has been in production since 2008, provides, says Anamaria, “the benefits of low impact running without the butt pain of biking.” It’s evidently  built to go the distance; Anamaria and her husband, also on an Elliptigo, were planning on doing the 100K ride. 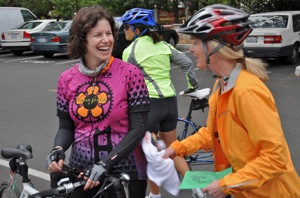 The “start when you’re ready” and three distance options – 46K and 35K in addition to the 100K – gave participants the chance to talk it over before setting out for their chosen distance. “I’m taking the green route,” said one female participant (pictured orange jacket) , on finding that the Foothill Blvd. portion of the longer ride was more than she felt capable of tackling. Her friend (Velogirls shirt) was taking the longer route. They, like other riders, would meet for lunch at Picchetti Open Space Preserve.

There were 3 routes: 100, 75 and 60K. I did the 75K (46 mi). The weather was perfect (hey, it’s Menlo Park!). All participants enjoyed a BBQ lunch at Picchetti’s Winery (no wine for us) off Montebello Rd in Cupertino at about the midway point. Overall a well designed and enjoyable ride.