Live from the storage shed – ElliptiGO is good to go 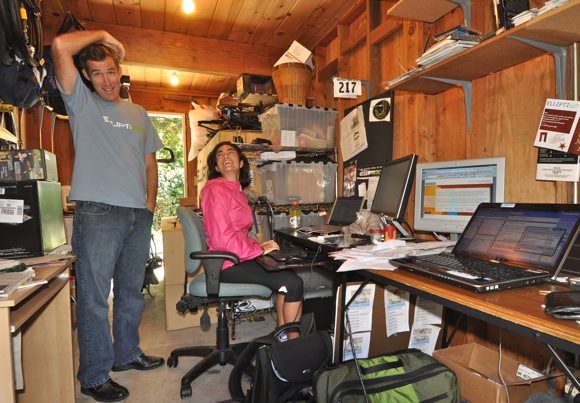 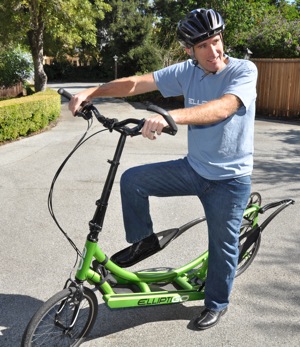 In the valley of famous garages – think HP and Google – ElliptiGO has its shed, tucked behind a garage at the end of a long Atherton driveway. It’s the Northern California location of the company that’s brought running to biking, so to speak.

“What we’re trying to do is build a sport,” says ElliptiGO co-inventor Bryan Pate, from the “comfort” of the office shed he shares with colleage AnaMarie Nino-Murcia. “We want to create a legitimate new fitness category that attracts people who want the experience of running without the damage to the body. The goal is to give our customers the experience of a good outdoor workout.”

The ElliptiGO looks a bit more like a scooter than a bicycle. That said, most of the critical components are bike parts. The elliptical-machine-like pedals differ from the indoor gym variety in that the stride length is longer and the recovery angle is modified to better emulate running.

“That was our biggest engineering challenge – designing a low weight, high performance system that replicated the running motion,” says Bryan. “We also wanted the system to have maneuverability and portability.”

At 40 pounds, the ElliptiGO is far from featherweight and at just over $2,100, it’s not cheap. But it’s piqued the interest of and endorsement from elite athletes such as ultra marathoner Dean Karnazes. And, to prove it’s built for climbing, Bryan and colleagues ride in some of the most grueling cycling events. Next on the list is the Mount Diablo Challenge in October, a timed, 11.2-mile road race with an elevation gain of 3,249 feet.

Built  primarily as a workout system, Byran says people can get creative with accessories. “Most things you might add to a bike mate efficiently to our system.”

The company’s main office is in Solano Beach where, says Bryan,  they have “a real facility with real windows and a front door.” For the Northern California contingent, the shed will do – they’re just thankful for this summer’s cooler-than-average temperatures.