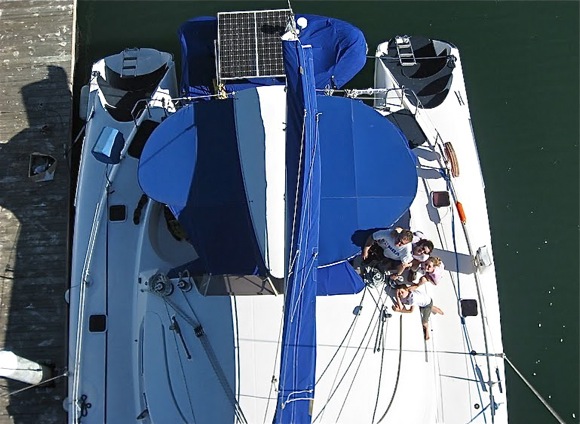 What if you could hit the pause button for life as you know it? Michael Mitgang, spouse Barb Gottesman, and their two children, Danielle and Harrison, did just that last October when they set sail on their 46-foot sailing catamaran –  aptly named Whatcha Gonna Do – from San Diego to Manzanillo Mexico. The Menlo Park residents were back in town recently for a visit with family and friends before setting off on year two of their voyage today. While in port, InMenlo caught up with the ocean-going family to get some trip highlights. 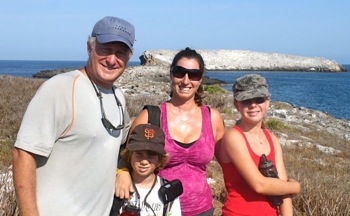 Michael explained that they’d first thought of doing a trip like this when the dotcom bubble burst. “But the kids were three and six months then, so the timing wasn’t right,” he said. “When the economy imploded this time around, it was the perfect opportunity to pursue our dream. I’d done a lot of sailing here in the Bay Area and on Lake Ontario. Barbara was willing to give it a shot.”

Barb said she was reluctant initially. “I didn’t know how to sail, for one,” she said. “And I had trouble enough helping my kids do their homework, so the prospect of home schooling seemed daunting. But professionally I’m a life coach and I do love to travel. So I did some research on home schooling and was able to get comfortable with the idea. The kids can’t leave the boat until their school work is done.”

The family thought they’d get farther south in year one, but found themselves staying in places longer than they’d anticipated. “Our experience was enriched by getting to places and hanging around to get to know the local people,” said Michael. 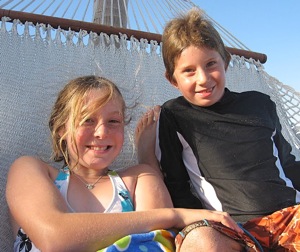 Each family member has a special favorite moment from their first year (although each  said it was hard to choose). For Danielle, it was swimming in phosphorescent plankton that glow in the dark on the evening of her 12th birthday. “When you jumped into the water, you were surrounded by a green glowing ball,” she said. “It was so cool.”

Nine-year-old Harrison also chose a birthday adventure. “We were in Canacona south of Puerto Vallarta and we got to do a river boat cruise,” he said. “I also liked it when Danielle caught the 3 1/2-foot Mahi Mahi.”

(It should be noted that both kids do a lot of the cooking and have come up with five ways to serve fish.)

Not surprisingly the adults’ favorite moments are more serene. For Michael: “When there’s no motor on and no generator running and it’s just 20 knots of breeze and we’re sailing a long distance.” For Barbara: “We were in the Sea of Cortez all summer and it was brutally hot, so we slept outside on the hammocks. I’d wake up every morning when the sun came up and pinch myself, thinking ‘I can’t believe we’re doing this – wow, another day!'”

In year two, the family will depart from La Paz and hope to get down to Panama, Costa Rica and Guatemala. We’ve added their blog to the InMenlo home page so you can follow their journey.

Photos courtesy of the Mitgang/Gottesman family.