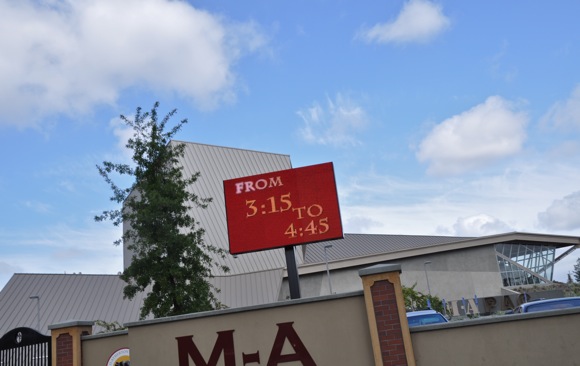 As you approach Menlo Atherton High School  from Ringwood Ave, the looming Performing Arts Center transforms into a distant backdrop for the curiously bright lights of M-A’s LED billboard, a recent addition to the high school campus.

“Having that old janky sign was like owning a tube TV right after everyone switched to flat screens,” commented M-A principal Matt Zito. “I wanted [the billboard] to be cutting edge, to make M-A look modern and interesting.”

Once on her way to school, junior Selin Kutlu glimpsed the sign for the first time and remembered “[The billboard] flashed black and then yellow and I was like ‘What the hell was that?!’” Although it was once distracting, Kutlu now finds herself peeking expectantly at the board every day, waiting to see what news will be flashing at the oncoming traffic.

John Giambruno, an English and Video Production teacher at M-A, was presented with the task of updating and maintaining the information that flashes daily across the billboard screen. Much of this task is lightened with the aid of his four advanced video production students: Lauren Diller, Dominque Ellis, Kate Vallarino, and Alex Youngberg.

“Every Monday I have the students look at the M-A calendar on the school website so they can include all the events of the following week in their slides,” explained Giambruno. Besides spelling and visibility, the students are unlimited in the creativity that goes toward these weekly productions.

“I love how we have the freedom to use the skills have learned to express whatever we want, instead of everyone doing the same thing,” remarked Lauren Diller, grade 11.

“I try to enforce equity,” added Giambruno. “I want the people being advertised to be satisfied with their slide, but I also try to refrain from changing too much of the students’ work.”

After each student submits their set of slides, Giambruno uses the LiveType program to edit and compile a set that lasts approximately 90 seconds. This finalized version will then run approximately 5,000 times between one Tuesday and the next.

Although the lighting remains at an average of 70% brightness throughout the day, the LED board uses a significantly less amount of energy than other kinds of signs. It runs from 6:12 am to 10:12 pm, everyday, to avoid a disruption of the community during the night.

Despite this attempt to limit disturbance, neighbors have complained about the sign, claiming it is too bright and rather garish.

This $75,000 piece of technology made its way onto the campus during the summer of 2009, with the addition of the PAC. It was part of a side project of $4 million dollars that paid for various landscaping projects that beautified the campus.