Spotted: Yes, coyotes (at least one!) in Menlo’s backyard 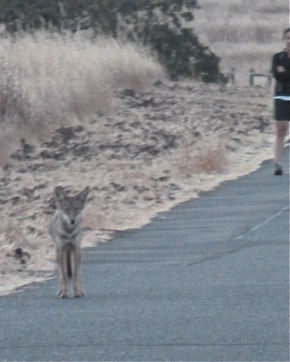 Stanford’s Big Dish area is Menlo Park’s open space backyard. Writes one Menlo resident on Yelp: “I love how each hill is a challenge and when you reach the top, you get the cool down of walking downhill or straight ahead. The views from the top are beautiful and so refreshing! The only issue I have ever had is the whole mountain lion/coyote thing. I’ve never encountered one but the signs always prepare me. I’ve come across snakes in the summer but they don’t bother and I just keep going…”

Well, maybe she should be “doing the Dish” a bit earlier. Your InMenlo correspondent jogs the Dish at dawn two to three times a week, and starting about a month ago, began encountering a mother coyote and pup. For the last two weeks, it’s been the almost full-grown pup on its own. The “issue” (if indeed it is one) is that this pup seems not to be phased by people, nor – and this is to be underscored – does he/she threaten human beings — much too busy trying to capture some rodent for breakfast. This morning the pup trotted along  one side of the paved trail while your correspondent jogged by on the other side. And they both just kept going.