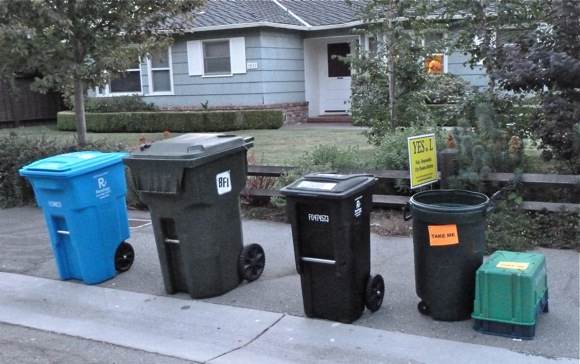 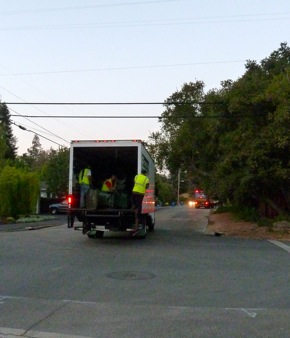 At least one Menlo Park neighborhood received new garbage and recycling cans yesterday, and they were curbside this morning for pickup, along with old cans orange-tagged for removal. Two trucks followed the garbage truck, picking up the now outdated bins and cans.

The delivery of new cans is a couple of weeks ahead of schedule, all in preparation for the week of January 3, 2011 when Recology will take over the waste and recycling collection services currently being performed by Allied Waste. An earlier announcement indicated that Recology would replace Menlo Park residents’ current recycling, yard trimmings and garbage carts from October 25 through November 2.

Recycling and yard trimmings will be continued to be collected every other week through the end of the year. Starting the week of January 3, there will weekly collection of both garbage and recyclables materials. As part of the new service residents will receive:

• A Blue Recycling Cart (64 gallon): For all recyclables mixed together, including paper.
• A Green Yard Waste/Compost Cart (96 gallon): For yard trimmings and food scraps (meat, vegetable scraps, paper plates, pizza boxes, and other food soiled paper products). Note: No food scraps in the yard/compost cart until Jan. 3
• A Black Garbage Cart (20, 32, 64 or 96 gallons): For anything that you can’t recycle or compost. Please note that  garbage rates will be based on the size of the garbage cart. A 20 gallon cart will have the lowest rate while the larger carts will respectively cost more. To change your garbage cart size, please call Recology at (650) 595‐3900.
• Small Two‐Gallon Kitchen Pails (to be delivered December. 8-9): To collect  food scraps in the kitchen for transfer into your yard waste/compost cart.

Once residents have new carts, Allied Waste of San Mateo County will have crews out to pick up the old cans, tubs
and carts for reuse or recycling (as they were doing this morning on Stanford Ave.). This includes your old yard trimmings carts (except if you purchased them directly from Allied Waste) or you can choose to keep your recycling tubs and garbage cans that you purchased. If you do want them taken away, simply place your recycling tubs empty and upside down next to your carts. Stickers will be provided to place on old garbage cans that residents  want  removed. Old recycling tubs and garbage ans can not be used about January 3, 2011.

There will be a community meeting in Menlo Park on October 14 at the City Council Chambers from 6:00 to 7:30 pm. You can also contact Menlo Park’s Environmental Program at (650) 330-6740 and visit Recology of San Mateo County and/or South Bayside Waste Management Authority online.