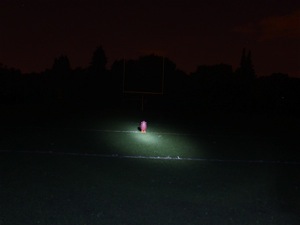 The editors of the M-A Bear News put together this response:

Was it so surprising for our residential neighbors to wake up one morning and find themselves living next to a high school? M-A was founded in 1951, but perhaps we should have known that fifty-nine years is too short of notice to spring something like football games on the locals.

Yes, the Sequoia Union High School District brought in temporary lights in an attempt to sidestep the Environmental Impact Report (EIR) that prevents or at least delays the installation of permanent ones. Yes, the town of Atherton has the right to bring this to a judge’s attention. And yes, the judge’s decision was perfectly reasonable. However, the very nature of the report itself is superfluous, because it can only show what we already know: students will be at school.

According to Protect Atherton’s Residential Character (PARC), the report is needed to evaluate the “potential harm to the neighbors of increased traffic, increased noise, increased influx of gangs or other non-residents, increased crime, and infiltration of bright lights, all during the evening, night, and weekend hours when no such harms presently exist.”

So let’s examine their concerns.

Traffic. Is the traffic for football games really going to be worse than traffic for the basketball games we hold at the exact same time? Or for the classes we attend every day? There will be traffic. But there is no reason to believe that Atherton can’t handle three evenings a year for which traffic is no more than on any school morning or afternoon.

We hardly think that a football game that takes place before the noise curfew will cause more noise and “infiltrating” light than night games at Woodside, Sequoia, or thousands of other high schools in normal parts of the nation.

As for the gang members and “non-residents,” could these “non-residents” be the East Menlo Park and East Palo Alto students that pass to and from the Atherton neighborhood to get an education every single day? The same “gangs” who, though they attend Menlo-Atherton High School, do not have a 94027 zip code to their name?

Surely the only thing keeping them from pillaging your homes was the poor lighting.

PARC’s lawyer Anna Shimko claims that Menlo-Atherton “[has] not justified the need for the late use of the lights at all.”

However, Shimko seems unable to comprehend that winter sports are played in winter. Night falls at about five pm. Coaches have repeatedly explained in innumerable public settings that our new, later start time pushes games and practices into the later hours of the evening. PARC has heard these reasons before, and ignores them. In doing so, they deny the importance of having sports at all.

Instead of creating deliberate delays in an inevitable process, our neighbors should let the temporary lights stand. What better way to evaluate the lights’ environmental impact than to see their effects firsthand?

Apparently there is no room in Atherton’s “residential character” for a high school football game. If given the chance, based on their intolerance for normal school functions, PARC would injunct Menlo-Atherton itself.