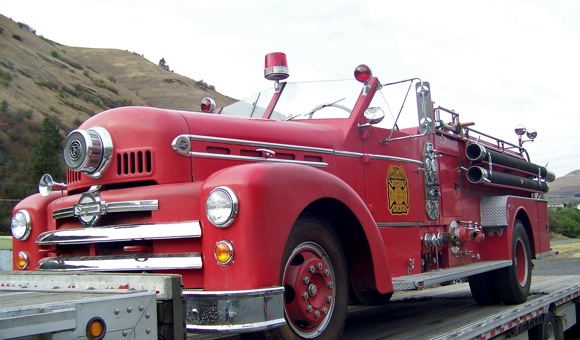 We got word from Menlo Park Fire Protection District Chief Harold Schapelhouman that one of the district’s original 50s era trucks – a Seagrave convertible fire engine – will be arriving home tonight at Fire Station 77 after being gone for over 30 years.

The classically styled Engine was sold to the Juliaetta, Idaho community and volunteer fire department back in the late 1970’s after serving the communities of Atherton, East Palo Alto and Menlo Park for over two decades and being retired as Engine Two operating out of East Palo Alto. While in service for the Fire District, the engine had responded to thousands of incidents yearly but responded to just 38 calls last year in Juliaetta where it worked in sub-zero temperatures climbing 12% grades on the surrounding mountain roads.

Chief Schapelhouman was contacted by Volunteer Fire Chief Mike McGee last year asking if the Fire District was interested in reacquiring the engine. A sales price of $4,000 was agreed upon; the purchase was underwritten by a donation from Peter and Jane Carpenter.

The fire engine, pictured in Juliaetta last Friday before starting the 1,000 mile journey to Menlo Park, is in good shape; the District’s task will be to restore it to 1950s perfection. The Seagrave engine will join the Fire District’s 1900 Hose Wagon and 1930 Aherns Fox Fire Engine. It represents the last of a generation of classically styled open cab apparatus, representing an era when firefighters rode on the tail board of the apparatus. The Fire District moved from the use of open cab to enclosed cab apparatus in the 1980’s and from the smaller traditional fire apparatus to larger engines.

Emailed the Chief: “The Fire District is closely tied to the community, and it is our pleasure to bring this historic piece of local history home for current and future generations to enjoy.”

There is no second S in Seagrave. Go look at the engine when it arrives. Seagrave. If they had two of them then it would be Seagraves.

Just today I bought a Matchbox toy model of the Seagrave Fire Engine
(Station No.1)(Volunteer). I must say I never heard of it before!
Your Fire Engine looks wonderful.
Best wishes, Ed Sijmons (Holland/EU)