Imre Kabai: Flying ultra light for a cause 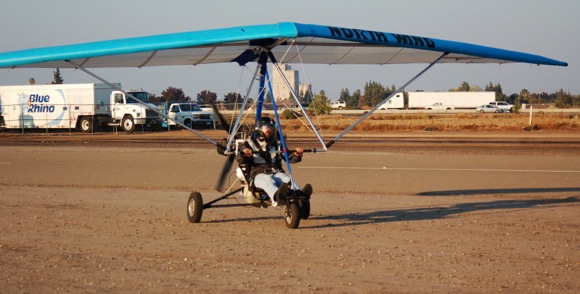 Imre Kabai, SLAC’s new IT Enterprise architect, seems at first glance like a typical Silicon Valley dad. He juggles a computer job, a commute, and time with his wife and four kids. He reserves what little time he has left for a variety of projects. Kabai could be in any one of the cars making the daily trek on Highway 280 or 101 — or the long haul from the East Bay — to his job in Menlo Park. That is, until you talk to the soft-spoken SLACer about some of those projects — both of the past and those that lie in the future.

Among completed or in-progress works, there’s the seven-acre farm in Gilroy with a walnut orchard, vegetables, chickens and rabbits. Bees, too, that Kabai affectionately calls “my girls.” There are unicycle rides and the family music group. There are motorcycle trips taken and planned, including a trip that retraces Kabai’s previous route to Alaska, only this time on a motorcycle converted to run on vegetable oil and outfitted with a sidecar to hold fuel tanks and a filtering system. Kabai plans to call restaurants on the road ahead and ask for their old cooking oil for his “veggie bike.” He sees only one challenge.

“If you run your motorcycle on cooking oil, it smells like French fries,” he said with a smile. “When I camp out there in Alaska, I’ll have to figure out how to deter the bears.”

Taking to the air to raise funds for Blind Judo Foundation

If this sounds a little crazy, consider some of Kabai’s previous adventures. The one he’s most open to talking about — because it was a benefit for his favorite charity— started innocently enough, with judo, the family sport. Kabai discovered that his children’s coach, Willy Cahill, is also the coach of a blind judo team and involved in the Blind Judo Foundation.

“The interesting thing about judo is that blind people have the same chance as sighted people when they compete, and in fact some of the blind athletes are as good as or better than most sighted ones,” Kabai said. “So it’s kind of a big equalizer in life, that there’s finally something where they have the same chances, because you don’t need your sight. It’s all about balance and energy.”

Spurred by that interest, coupled with the family’s personal connection to the foundation through Coach Cahill, Kabai decided, “Maybe we could do something for this foundation.”

What he decided to do was tie his fund-raising efforts in with his love of flying, a hobby he’s been doing since he was 15 years old. Kabai would fly, and the foundation would arrange media coverage and handle donations. For Kabai’s first fundraiser flight in 2008, he circumnavigated California’s Central Valley in an ultralight personal aircraft.

Encountering the people of rural California on his adventure

“It was a tiny plane that flew at about 38 mph,” Kabai said. “I carried a sleeping bag and tent and I had a collapsible fuel tank so I could walk to get fuel.”

“You meet lots of interesting people” on such an adventurous flight, Kabai explained. “Everybody’s very curious. California has a very different face when you go out to the rural areas.”

Amazingly, Kabai traveled alone, without a family ground crew. “That’s the real fun part,” he said. “Just go out and fly, without knowing exactly where to land, what to eat. That was a fun trip.” His voice turned a bit rueful. “Tiring too.”

Setting his sights on circumnavigating the U.S.

The fun apparently outweighed the exhaustion, because the following year Kabai decided on an even more ambitious trip. Instead of circumnavigating the Central Valley, he would circumnavigate the United States.

“The plan was to go east all the way along the Canadian border, fly around the Statue of Liberty, fly to Kitty Hawk, and then go all the way down to the tip of Florida,” he said, “and then come up again and cross the Rockies on the south.” He would progress to San Diego, including a stop at a place called Otay Mesa, where the first controlled glider flight took place in 1883. “And then just come home.”

Kabai made it to Montana before the fates — and a leaking radiator — intervened. However, he’d already managed the toughest part of the flight, the passage over the Rocky Mountains. He contended with bad weather, sudden down drafts, tail winds that doubled his speed, and passes that were barely lower than that 10,000-foot ceiling of his powered paraglider. And he wants to do it again.

It’s not the notoriety. Kabai chronicles his adventures on a family blog, but most of the content consists of tips for other motorcyclists and paraglider pilots. It’s not the adrenalin—well, not entirely. A big part of his motivation seems to be to show himself what is possible.

“These look like challenge for the sake of challenge but it’s not that at all,” Kabai said. “The point of all this is to put myself in a situation where I don’t even know how I will react. Place myself out of the comfort zone enough to learn.”

This post is from SLAC Today; used with permission.