James Dann: Making physics accessible to all students with the help of CK-12 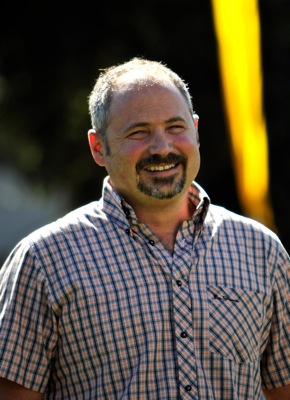 The principles of Newton and Galileo are well-known and free, so why, once they’re packaged up in a high school physics textbook, do they become so costly?

“I found it obnoxious that people were profiting on students – that they were forced to buy expensive textbooks,” said James Dann, a former CERN physicist who now teaches at Menlo School. So he went to work with his father, who also teaches physics, writing a textbook that they would make freely available to everyone.

The writing of the People’s Physics Book solved another problem in Dann’s mind. “I also was frustrated with the pedagogy of the typical textbook,” he says. “Textbooks were listing every physics possibility under the sun and kids were just memorizing them. I didn’t want my students to memorize, I wanted them to think – and ultimately understand physics.”

Dann has taught at Menlo for five years. He teaches both physics and AP physics and has created a class called applied science research where students do research and solve real life engineering problems.

After the People’s Physics Book was published, Dann and his father gave some talks and soon had about 50 very enthusiastic users of their textbook. But breaking through the state schoolbook bureaucracy proved difficult. Enter Neeru Khosla who founded CK-12, a non-profit organization based in Palo Alto. Its mission is to reduce the cost of textbook material for the K-12 market both in the U.S. and worldwide using an open-content, web-based collaborative model termed the “FlexBook.”

“We donated our physics book right away,” says Dann. “Neeru had a great vision that allowed for the editing and formatting a book at the same time. I still work closely with them, and thanks to CK-12’s software, we’re working on a multimedia People’s Physics Book.”

In the meantime, the second edition of the Danns’ textbook is available on the CK-12 website.