What really is random? Now we know. 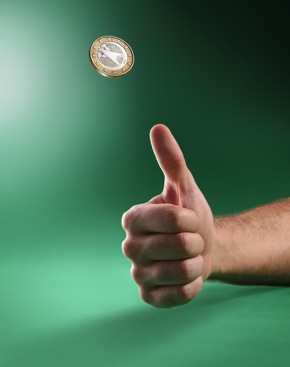 Editor’s note: Every Friday, the SLAC Today newsletter features a word of the week. Today’s was “random,” which some of us probably mis-understand and mis-use. That’s why it’s great to have geeks in Menlo Park!

A truly random event can be neither controlled nor predicted. Given the same set of starting conditions, all possible outcomes have an equal chance of happening. Flip a coin, for example, and it is just as likely to land on “heads” as it is on “tails.” The same goes for rolling an unbiased die.

A common misunderstanding about randomness is that the occurrence of one outcome boosts the chance of a different outcome happening next. But for random events, previous results have no influence on future ones. For example, if nine successive coin flips result in “heads,” there is no reason to assume that the next flip should land on “tails.” That final flip is independent of the previous nine. After a sufficiently large number of flips, it is likely that each outcome will appear about half the time, but there is no way to determine the order in which they happen.

This notion is important for applications such as information security. For example, most electronic data is encrypted with a 128-digit key, whose numbers are generated randomly. There are 1038 equally possible combinations, making it difficult for even the fastest computers to guess the correct order of the numbers and intercept the data.

Photo by ICMA Photos under the Creative Commons Attribution 2.0 license.