What’s it like being on stage? The cast of Pride and Prejudice talk about their experiences 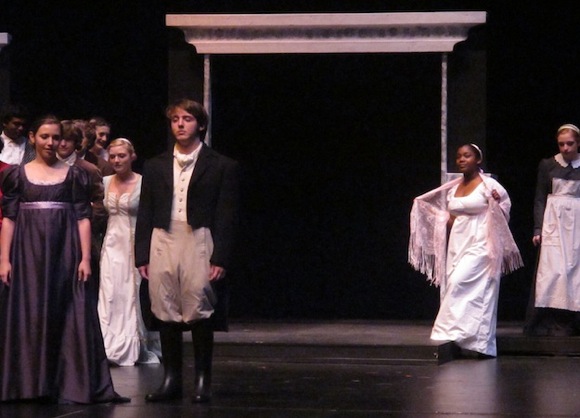 We all know the basic plot of any Jane Austen story: Girl falls for boy, but he must not know. Boy falls for girl, but she must not know. They find out and everyone is happy. The end. But to the cast of M-A’s production of Pride and Prejudice, the show represents not only hours of tedious memorization and endless practices, but also the creation of a strong camaraderie.

“Being the lead is definitely nerve wracking, especially when you have 311 lines to memorize,” admitted junior Dana Rust, who plays the rebellious Elizabeth Bennet.  Rust is always on the stage, either acting or quick-changing in the wings.

“One of my favorite parts of the production is the costumes,”said senior Janae Peats, who plays Lady Catherine. “They really give me an idea of what my character is supposed to be like.”

The actors sport Regency attire – floor length dresses for the ladies and military uniforms or tailcoats for the men. Some of the actors even gave their interviews in carefully practiced British accents.

Almost all of the cast members agreed that the best part of the production was getting to know each other and bringing the “drama family” together in the cast parties.

“It’s a great experience that you can’t really get anywhere else,” said junior Chris Chao, who plays an officer in the Meryton Townhall Ball.

Alec Addicott, a freshman who plays Charles Bingely, added, “It’s fun to see how the cast interacts on and off stage.”

When asked about the challenges that arose in the production, junior Claire Jungleib, an ensemble member, said, “Different parts of the play changed everyday and there wasn’t much continuity at first.”

Actors also found waltzing around the stage and dancing in sync particularly difficult.  Those with props voiced concerns about getting things moved in a timely fashion.

Ali Candlin, the student director, praised the actors for working through the challenges and putting on a magnificent show. “The cast and crew have come through it all admirably – they’re so resilient. It’s impressive how willing everyone is to work with each other, put in that extra time to improve themselves and the show, no matter how big or small the part.”