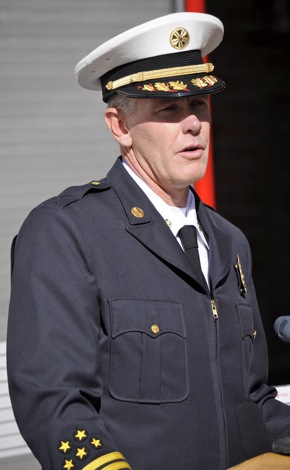 Fire fighters from around the Bay Area gathered at the Menlo Park Fire Protection District’s Station #1 this morning to kick off Operation 7: Save a Life, a campaign designed to increase public awareness about fire safety and the dangers of carbon monoxide poisoning. The event, which came at the beginning of Carbon Monoxide Awareness Week, was sponsored by KGO-TV and its corporate partners, Kidde and the The Home Depot.

“For less than half the cost of a video game, more than 230 Californians might be alive today,” said Fire Chief Harold Schapelhouman. “Tragically, lives have been lost because the most effective line of defense against carbon monoxide – a working CO alarm – wasn’t in place to bring attention to this silent killer.”

Operation 7: Save a Life is a community service initiative that distributes free smoke alarms and CO detectors to those who might not otherwise have them, particularly low income and elderly households. Kidde donated 3,000 smoke alarma and 600 CO detectors which KGO-TV will distribute with the help of Bay Area Fire Departments, including the Menlo Park department. 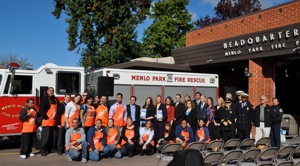 In his remarks,  Chief Schapelhouman talked about an incident several years ago when Menlo Park firefighters were dispatched after receiving a call that a child was sick inside a home.  As they responded they were advised that more children had become ill,  and by the time they arrived, they found a total of eight people, three adults and five children,  several of whom who were unconscious. They quickly recognized the problem as carbon monoxide poisoning and moved everyone outside into the fresh air and treated the victims with oxygen.

“They all survived, but tragedy had narrowly been avoided because something as simple as a CO detector had not be installed in the home” said Chief Schapelhouman. “A new state law will help prevent future incidents by requiring CO alarms in most California homes.  While it doesn’t go into effect until next year, it’s smart to get a head start on protecting your family and install alarms on each floor of your home and near sleeping areas.  It will take just a few minutes of your time – but could save a life, perhaps your own.”