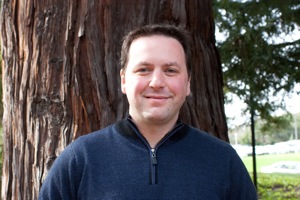 SLAC theoretical physicist Jacob Wacker has been named a recipient of the Presidential Early Career Award for Scientists and Engineers. Wacker looks to explain physics beyond the Standard Model, a set of laws governing the known particles and forces in the universe.

“Science and technology have long been at the core of America’s economic strength and global leadership,” President Obama said in a Department of Energy news release. “I am confident that these individuals, who have shown such tremendous promise so early in their careers, will go on to make breakthroughs and discoveries that will continue to move our nation forward in the years ahead.”

The award is the highest honor bestowed by the U.S. government on outstanding scientists and engineers in the early stages of their research careers. Wacker is one of 13 recipients supported by Department of Energy, and among 85 researchers in 10 federal departments who share this year’s honor.

Wacker will receive up to five years of DOE funding to advance his research, which includes probing the existence of exotic particles and combing through data to validate or refute theories about the nature and origin of dark matter — a mysterious, invisible substance thought to make up nearly 80 percent of all the matter in the universe. He also works closely with experimental physicists, offering new theories to be tested and providing theoretical explanations for the hiccups sometimes seen in experimental data sets.

Hi, this is first time to make a comment in which I have an interest his approaching to physics beyond the Standard Model; the quarks, even pi-meson, and the other particles do not exist even though they attempt to detect particles scattered in a particle collision. And The new energy system is possible to construct not by the high energy physics, the extremely dangerous nuclear power, but by pi electron Cooper pair tube, and D-tube which, I think you are familiar with, are very safe to make an innovative power plant.