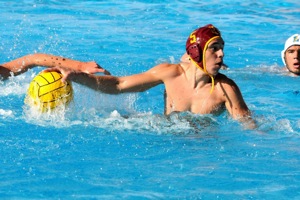 The Leland Chargers posted a major upset in the quarterfinals of the CCS Division 1 boys’ water polo playoffs at Lynbrook high on Saturday, pulling off an 8-7 overtime victory over third-seeded Menlo-Atherton.  Goalie Tanner Sarpa was instrumental in the Chargers win with 19 blocked shots and Matt Ructer led them in scoring with 3 goals.

The Bears got on the scoreboard first and raced out to a 2-0 lead in the first period and held a 3-1 edge at the half.  Leland scored the only goal in the 3rd quarter to close the gap to 3-2.  The Chargers took over in the 4th period, twice opening a 2 goal lead.

Down 7-5 with 1:09 left on the clock M-A senior Evan Navarro (pictured) let loose with a long range shot that found the back of the net. Leland then ran down the clock before turning the ball over to the Bears with :07 remaining. Freshman Evan McClelland found Navarro open and he fired another one from way outside as the buzzer sounded to force overtime. In the second overtime period Leland’s Scott Keighley whipped in the game winner that puts them into the semi-finals next Tuesday.

Navarro led M-A with 3 goals to go along with 5 steals and 3 earned ejections and junior goalie Alex Gow turned aside 10 Leland attempts.  M-A wrapped up its season with a 16-8 record.