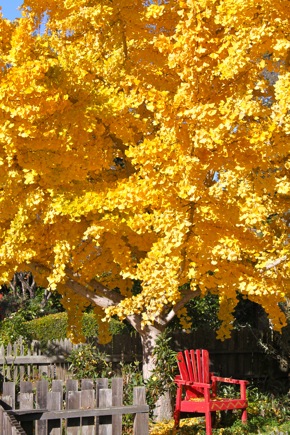 We’re guessing we’re not the only one to have noticed how very, very dark the sky got yesterday afternoon just before a major downpour accompanied by strong wind. The latter undoubtedly knocked some of Menlo Park’s fall color to the ground.

One last bit of of rain blew through just before dawn this morning, yielding to blue skies. InMenlo weather watcher Bill Russ reports: “There was .6″ of rainfall in my gauge when I checked it just before 8:00 am. That brings my year to date total to 3.85″ which compares to 4.1″ at the same time in 2009. (But most of that fell in a big mid-October big storm.) We are on course for a 20″ full season.”

Photo of Ginkgo tree located on Bay Road and Oakland by Alisa Voris, who was good enough to submit it to InMenlo as another example of Menlo’s great fall color.