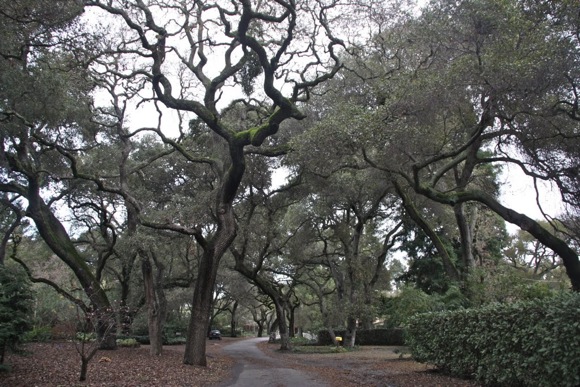 There are almost 300 households in Menlo Oaks, the Menlo Park neighborhood just east of Middlefield Road that’s bound by Ringwood and Berkeley. Distinctive oaks  fill the streets. How many is unclear, but there’s no question who takes care of them.

“We are an unincorporated part of Menlo Park so we maintain the trees ourselves, not the city,” says Menlo Oaks Homeowners Association president Michael Johnson. “The city has asked us a number of times if we wanted to become a part of Menlo Park. Every time it’s virtually unanimous that we don’t want to. Most resident like the rural feel of the neighborhood.” 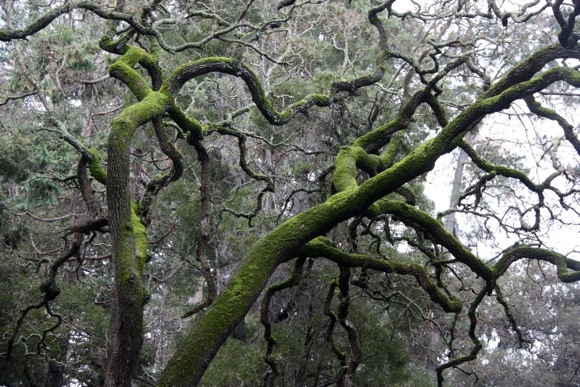 The other thing residents agree about is how much they like the diversity of home styles – from shingled old mansions to Spanish style adobes with a sprinkling of craftsmen and modern homes. While horses are no longer on any property, chickens and bees can be found in a number of back yards.

“I got my bees to pollinate the plants,” said Michael. “Now we’re bottling it the honey u[ and selling it as local. I’m planning to expand my hives.”

Like other parts of Menlo, Menlo Oaks was once part of Rancho de Las Pulgas. In 1882, the Coleman mansion – now Peninsula School – was built on a 165-acre parcel by Maria Coleman for her son James and his wife Carmelita. The couple never lived there; James sold it to Livingston Jenks in 1905 for subdivision following the death of his wife, which was ruled an accidental shooting. According to Beyond the Gate, Carmelita’s spirit has appeared at the school “in a diaphanous green dress.”

Frances these photos are awsome. I especially like the green moss (?) that grows on the trunks and branches, making the trees look like they are growing in the Santa Cruz Mountains rather than close to the Bay.