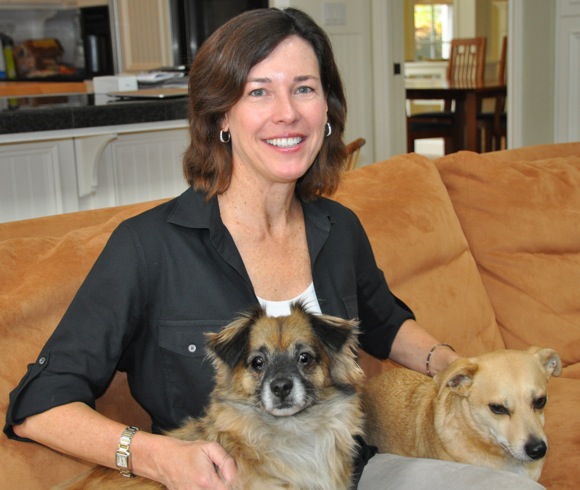 Kate Mulligan made a sharp right turn nine years ago, stepping away from her career to become a “stay-at-home-mom.” But her professional skills have not lay dormant; she’s applied her talents to volunteer work on a couple of non-profit boards, including M-A’s Foundation for the Future and the Humane Society Silicon Valley.

“The first year was tough,” she admits. “I wasn’t used to being at home and very used to being engaged in initiatives at work. I’d been so busy that I hadn’t had time to volunteer for anything.”

She did some work for the Las Lomitas Education Foundation before joining the Humane Society board eight years ago. “The shelter itself was old, but they were doing some fabulous work,” she says. “They really had a mission to reach out to community and educate people, saving and enhancing lives, not just animal lives.”

Selecting Menlo Park as home
Kate describes herself as a “converted dog lover,” owning her first canine, a Labrador when she first moved to Menlo Park 18 years ago. (Her two current dogs Stinson and Bear were adopted from the Humane Society.) “Both my husband and I grew up in the Bay Area, but neither of use had lived south of San Francisco. He was doing a post doc at Stanford, and I was working in San Jose. So we honed in on Menlo Park because it felt like a great community to live in, plus the school districts were strong.

“When I stopped working and my husband was now working in the City, we realized we could live anywhere – there was no longer a compelling reason to live in Menlo. But we’d become really settled here and loved our kids’ friends and the parents of their friends. So we bought another home in Menlo and stayed.”

Helping to transform the Humane Society shelter
As Board Chair of the Humane Society, Kate managed a capital campaign that raised $20 million and resulted in a brand new state-of-the-art facility in Milpitas. “Now they’re able to do everything they were doing around education at the old shelter and so much more. The animals are housed so that people can envision what they’d be like in their home. There’s doggy day care and a pet store, services that help support the shelter. There’s even a summer jazz concert.”

After rolling off the Board for a year, Kate recently rejoined. “I stayed involved the year I was off. And I still believe in what they’re doing. Plus, for me personally, I enjoy working not only with the other Board members but the wonderful staff, too.”

Getting involved with M-A’s foundation
Last year, Kate joined M-A’s fundraising arm, Foundation for the Future. “My daughter is a junior now and I really wanted to get involved with the high school. The Foundation is much newer than the two elementary school foundations but is already doing great things.

“I really like being on the Board because it helps students by funding programs that wouldn’t be possible without additional money. That’s a plus for the broader community, too.  A bonus is getting a better sense of the high school and what’s going on there.”