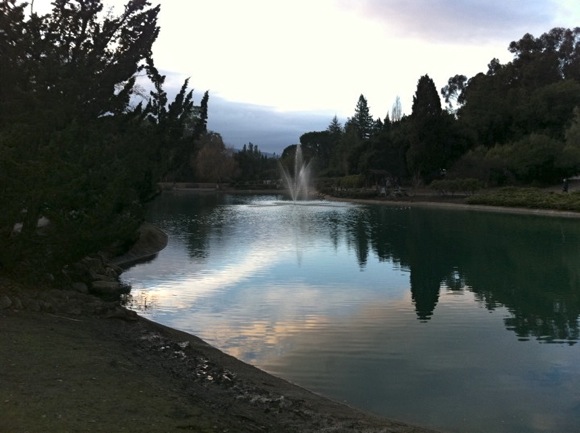 Time for a rainfall update – and a comment on some other weather-related happenings in Menlo Park. My backyard total, season-to-date, is 9.5″ compared to 6.55″ at the same date in 2010. This compares  to 9.70″ at the San Francisco Airport and 5.3″ in San Jose.

What is surprising is how close Menlo Park is to SFO and how low in comparison to San Jose. It reveals the variability of rainfall within 50 miles – and also shows something a bit unusual: Over the years my rainfall gauge is usually half between SFO and SJC, but not this year where it is tracking closer to the SFO.

More data: the 10 Santa Clara water banks are at 57% of capacity, Hetch Hetchy is 82%, and Crystal Springs is 93%. We have added eight minutes of daylight since December 21, 2010, but our Liquid Ambar trees better get dropping leaves if they are to be bare by the end of January. All of this is to indicate the various things happening we give little attention to, weatherwise.

Photo of  lake in Sharon Park by Scott Loftesness