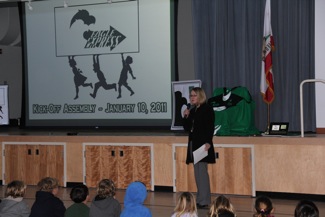 The project was initially suggested by Encinal Principal Allison Liner (pictured). “The Post Office is a great way to build community, connect with one another, and build writing skills at the same time,” said Principal Liner. As part of the school’s curriculum, students will be writing to one another and will learn basic letter-writing techniques as well as how to address an envelope.

PTO volunteers Jill Kispert and Heather Karp led creation of the Eagle Express over the summer and fall of 2010. With a team of other parents they designed and printed stamps; made Eagle Express uniforms and mail carrier bags; and installed mailboxes around campus and in the classrooms.

The student body voted on street names for their school campus, creating a new map with such names as “No Place Like Homework Way” and “Candy Way.” Second and third graders completed applications and interviews for jobs as mail carriers, nixie clerks, cancelers and postmasters. Every applicant got hired.

At a school assembly on Monday, January 9, 2011, Encinal Principal Allison Liner introduced the Eagle Express and its Code of Conduct. Then Menlo Park Postmaster Jeff Gaskill led a swearing-in ceremony for the “postal workers” that was followed by a round of applause.

“It’s truly amazing to see all these kids excited about the idea of working in the Post Office and delivering the mail next week. I would love to come back and watch them in action,” said Postmaster Gaskill.

I am Heather Karp’s mother, living in the Cleveland, OH area. I’m a retired teacher/reading specialist. What a brilliant idea to turn Encinal School into a postal zone! As a former teacher, I can see all of the benefits for reading and writing, not to mention encouraging community building, responsibility, and love of learning. I love the entire project! I only regret that I live too far away to be there to see it in action. Perhaps if you do it again next year I can come and be a volunteer. Congratulations!