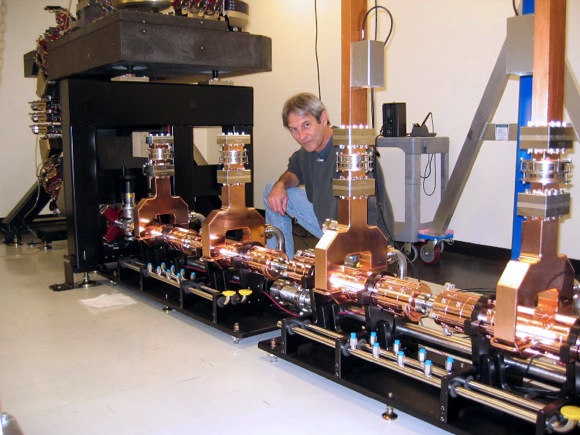 Cook (pictured above with the Compact Light Source) stayed busy at technically minded places, including a first stint at SLAC, where he went from working at the machine shop to working on the Super Conducting Final Focus — the magnets that focused the electron and positron beams before they entered the Stanford Large Detector during the 1990s. He also worked at research and development institute SRI International (where he “did fun stuff for a year and then got laid off “); Lyncean Technologies, a company founded by SLACers to produce compact versions of the Stanford Synchrotron Radiation Lightsource for industry and small labs (where he had the “dubious distinction of being the only guy on the planet to align both an accelerator and a storage ring”); and finally back to Menlo Park – and SLAC.

During all the years when Cook thought he had left rockets, rockets never really left Cook. He found that out in 1998, when he saw something that set the stage for his reentry — an article on the front page of the Hollister Free Lance, a local weekly, about a man named Bill Colburn who built rockets in a hanger at Hollister Airport. Cook thought Colburn might offer something he’d always yearned for in his younger days.

Dreams of something bigger, and of space

“I’d always wanted to build something bigger,” he explained. Cook went to Hollister Airport to meet Colburn, thinking Colburn might give him that chance.

“I walked into the hanger and saw this 12-inch diameter rocket that was over 20 feet tall,” Cook said, and laughed. “I thought, ‘Yeah, that’s bigger. This is going to be fun.'” He signed up on the spot. But, as Cook was to soon learn, the rockets were not the only aspect of his childhood hobby that had grown. The world of amateur rocketry he found extended far beyond the confines of the backyard where he’d launched his models as a boy — all the way to space.

A veteran of the Apollo space program, Colburn had a not-quite-a-dream, but a goal: To put an amateur rocket into space, space being 100 kilometers, or 62 miles, straight up. This is the same height that homebuilt aircraft pioneer Burt Rutan of Scaled Composites reached with his craft SpaceShipOne to win the 2004 Ansari X Prize of $10 million. Colburn’s not-quite-dream was called SORAC: Sub-Orbital Rocket, Amateur Class. 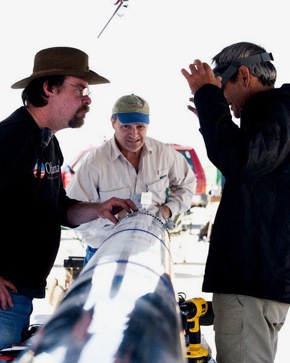 Cook (pictured far right examining a rocket) began working with Colburn, and they attracted other like-minded people to their group, including another rocket enthusiast named Jeff Jakob. “Over the years we launched probably two dozen large rockets and some smaller ones, smaller being six inches in diameter,” Cook explained.

Then Cook expanded his horizons. He headed to Black Rock, Nevada — of Burning Man fame — to help Jakob launch a rocket at an event called, simply, Balls. Formerly called Balls of Fire, “it’s the premier rocket event of the year,” Cook said. It takes place about a month after the denizens of Burning Man disassemble their temporary community and clean up the ashes of their burnt Man, following Labor Day. Rocket enthusiasts from all over the world converge on the desert, build their own, very different, temporary community, and participate in a whole slew of smaller but no less impressive burns.

“Typically about 400 to 600 people show up for Balls,” Cook said. “It’s all geared toward experimental rocketry.” Rockets at Balls can be single or multi-staged. They can use solid fuel or liquid fuel; “hybrid” rockets use solid fuel with an oxidizer such as nitrous oxide or hydrogen peroxide. These vehicles stand anywhere from six to more than 20 feet high, and weigh, fueled and ready to go, anywhere from 20 to more than 300 pounds. They can develop thousands of pounds of thrust, go hundreds of miles a second, and pull 10 Gs at lift-off. They regularly rise tens of thousands of feet, with at least one documented record of 100,000 feet — if something doesn’t go wrong, that is. At just over 40,000 feet, the hybrid rocket Cook helped launch last year seemed well on its way to the goal of 100,000 feet, then disappeared. It was never recovered.

“A lot of what we do is based on NASA way back when,” Cook said. But “way-back-when” technology is back in the spotlight with the current government push to encourage the development of less expensive access to space. In fact, NASA included among its Centennial Challenges for 2010, the Nano-Satellite Launch Challenge. The goal is to place a one-kilogram cube 10 centimeters on a side in orbit, and do it twice in one week.

Cook and his compatriots are definitely shooting for that one.