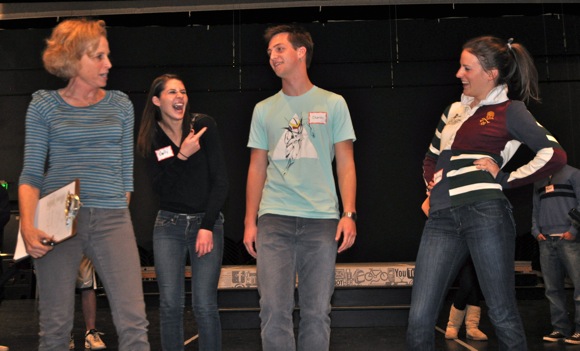 It’s countdown time to one of Menlo-Atherton High School’s most popular events, the annual fashion show featuring graduating seniors and benefiting the school’s PTA. We stopped in this week at a rehearsal, getting a sneak peak at this year’s show themed ANOTHER HIGH SCHOOL FASHION SHOW, a celebration of popular teenage culture. 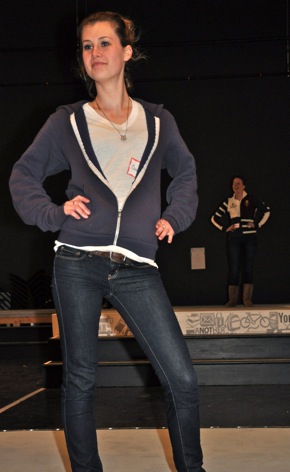 “All 19 fashion segments are named after a teenage movie,” said Kim Selby (pictured top left), who is doing double duty this years as the show’s fashion choreographer and mother to  Tommy Selby, one of the 200 seniors who are participating. There are also six dance segments choreographed by Nona Ybarra of Captivating Dance that feature the M-A Dance Team along with with other students.

This is the second year the show will be held in the Performing Arts Center and the first where models will strut a runway that extends beyond the stage. “We’ve ironed out any kinks discovered last year,” said Kim. “We’ve learned how to best use the stage.”

Kim is quick to underscore that the show is really about the kids. “Two hundred seniors are committing a big chunk of their time to make this successful,” says Kim. “Most have never modeled or danced before.”

Watching rehearsal it’s clear that Kim gets the kids in the spirit with her non-stop energy and instruction that keeps them both attentive and having a good time.

This year’s show is co-chaired by Suzanne Amato, Karen Armstrong, and Jill Smith, who also designed the sets (as she did last year). There are three performances, all on Saturday, March 5 at 1:00 pm, 4:00 pm, and 7:30 pm. General admission tickets will be sold at the door for all performances on a first-come, first-serve basis. While an M-A event, the wider community is very welcome to attend the show, which is made possible not only by the seniors but also hundreds of parent volunteers.

The class of 2011 rocked it Saturday! The students were gorgeous, inspiring, and talented and the audience had a fabulous time. Kudos to Kim Selby and congratulations to everyone involved.

The show was great!! It was fun to help out backstage on the 1pm show… what an amazing production, and amazing volunteers. And even better to see the evening show in the audience. Everyone was wonderful, and the show was so much fun!!

As fun as it is to watch, what’s really cool is how much the kids get out of it. The theater is an awesome space and it makes them feel like stars. The thousands of volunteer hours are well spent.

It’s truly amazing what a small army it takes to create a fashion show, but THE KIDS! To watch them develop as a model and/or dancer and experience the final product is amazing. The way they bond together, strangers are now friends, stars are born, confidence, instilled. It has been a true pleasure to take part in such an amazing project and I highly recommend everyone to get involved! Congrats Jill, Karen, Suzanne, Kim and Nona!!