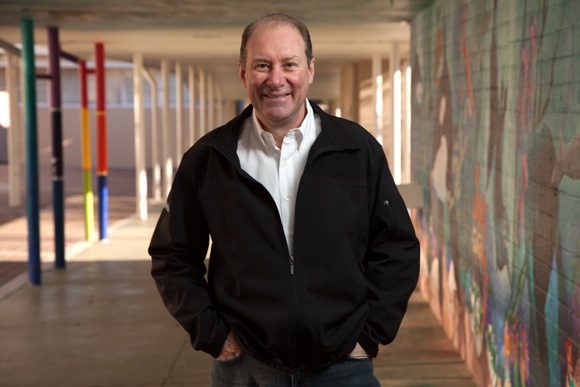 Charley Scandlyn can’t hide his enthusiasm. He’s a man on a mission, dedicated to improving the education of children in the Ravenswood City School District (RCSD), which has two schools in Menlo Park — Willow Oaks and Belle Haven — and seven in East Palo Alto.

Since January 2008, Charley has been the Executive Director of the Ravenswood Education Foundation, the newest foundation in an area known for its support of public schools. The Foundation’s vision is to foster educational outcomes that are on par with students in neighboring school districts. Charley feels privileged to be “a leader among leaders,” helping make the vision a reality.

“We’re making progress,” he says, citing the fact that, among other indicators, three Ravenswood schools have crossed the 700 API (California’s Academic Performance Index) threshold. “In 10 years, we hope to see a real shift. We believe our kids are smart and are learners. The Foundation is here to help people figure out how they can best help the district.”

The demographic make-up of the RCSC has changed over the past few decades:  72% of the students are Latino, with African Americans making up 16% and Pacific Islanders 10%.  Seventy percent are English learners.

To support the schools, the Foundation underwrote 10 projects involving 1,000 volunteers during the last school year. “The secret sauce in all of our projects is that they build trust on both sides of the freeway,” says Charley, the father of four boys ranging in age from 10 to 19 and a resident of Menlo Park since 1991.

He talks about the importance of helping 8th graders prepare for high school and getting parents involved. “All the data shows that when parents are involved, kids do better,” he says. “Our goal is to get 100 parents at each of the schools to give $10. We match that and the money goes to the school.”

For three years in a row, the Foundation has funded a Literacy Coordinator and now has added a Parent Outreach Coordinator, who lives in the community. Its also supports a program that makes it possible for 1,200 kids to stay in school longer in the day. “We pay for teachers to stay,” explains Charley. “It’s like regular school except the classroom size drops to 12.”

This school year every K-5 teacher in the district has been adopted by a team of supporters, which involves a nine month commitment and a financial cost of $400 to $500 in supplies. Each group assumes the responsibility of communicating monthly with the teacher, building and delivering two to three supply kits, and underwriting one or two class parties.

“This job is a joy and honor,” says Charley, who was formerly on the staff of Menlo Park Presbyterian Church, whose Compassion Weekend sparked the idea of forming an educational foundation. “The most important thing is that we are in relationship with the District — learning, understanding and influencing — and that relationship goes both ways.”

More information about how you can support the Ravenswood Education Foundation’s work can be found on the organization’s website.

Compassion Weekend is back April 2-3, 2011, and is open to the whole community to make a difference together up and down the Bay Area in education, healthcare, hunger, housing, and more. There are projects in the Ravenswood School District and projects for kids of all ages to help.