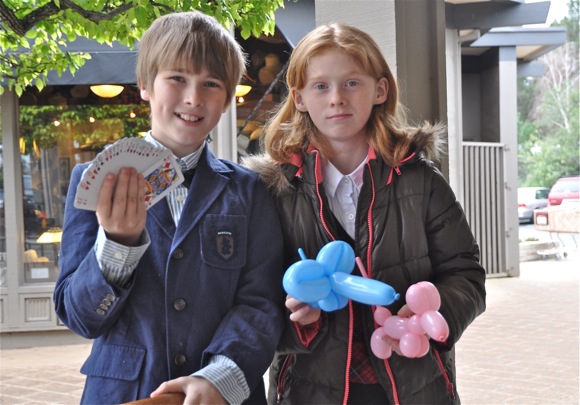 Ian Peterson got his first magic set when he was six. “It was one of those cheap beginner kits, but it got me interested,” says Ian, who is a 5th grader at La Entrada School in Menlo Park.

He went on to learn card and other tricks, using YouTube as one of his teaching tools, and now has aspirations to perform at children’s birthday parties. “I do card tricks during recess for the 4th graders, but I think the best birthday party age would be 5 to 7,” he says. “I can make a card float in the air.” 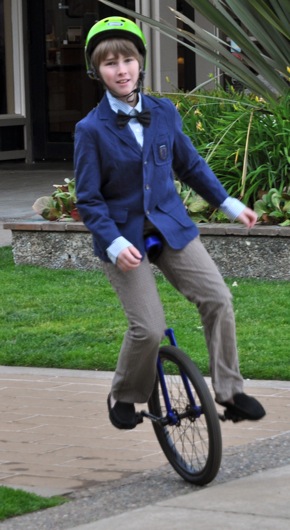 Many of Ian’s tricks are performed with twin sister Anneka as his assistant. “One of his favorite magic tricks is to twist a head 360 degrees, and I don’t like it one bit,” she says. Anneka has her own “tricks” ﻿ ﻿﻿﻿– s﻿he’s skilled at creating balloon animals.

Both Ian and Anneka have taken acting classes and appeared in plays and musicals. Ian, in particular, looks forward to becoming a sixth grader, when he’ll be able to take acting at school. He’s quick to point out that a magician must be a good actor. “Nobody wants to watch a dull performance,” he says.

Given Ian’s interest in all things magical and thespian, one might assume that he hopes for a future in the theater. Wrong. “I want to be a lawyer,” he says matter of factly — and with determination. “I love watching trials.”

If you’re interested in contacting Ian about putting on a show, you can email magic@charm.org, an address that is screened by his mother.

wow, i found this article and found it very interesting to look back on my life as a 5th grader. So many memories. Thanks for writing about us

As a junior at Menlo Atherton high school now, looking back on this article is a real trip. Many of my fellow classmates have stumbled upon this article and shown it to me. I am still an avid performer, though I unfortunately do not focus on magic so much besides the occasional card trick, but the unicycle is still my prefered mode of transportation. Thanks for this article as a nice memory piece and reminder that I always had a passion for performance. You can see more at: http://www.ianspeterson.com