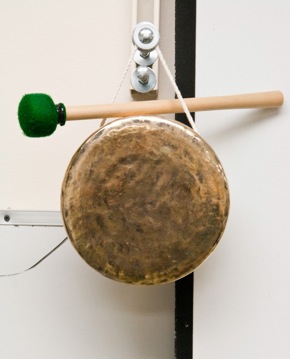 The Accelerator Operations group must run a tight ship in SLAC’s Main Control Center. Any threat to the prompt start of a meeting is occasion to sound the brass gong that hangs at the front of the MCC conference room.

“I wish there was a better story involving mysterious monasteries and chases thought the Seoul streets,” Frisch said, “but John and I were returning from a meeting in Korea about a year ago when we saw it in an airport shop and decided it would make an amusing replacement for the bell normally used to start meetings.”

A bell, too? Trust the folks running the linac to build redundancy into the system.

“I don’t know the history of the bell,” Frisch admitted. “But I think people like it more— the gong can be rather loud.”

From SLAC Today; used with permission.