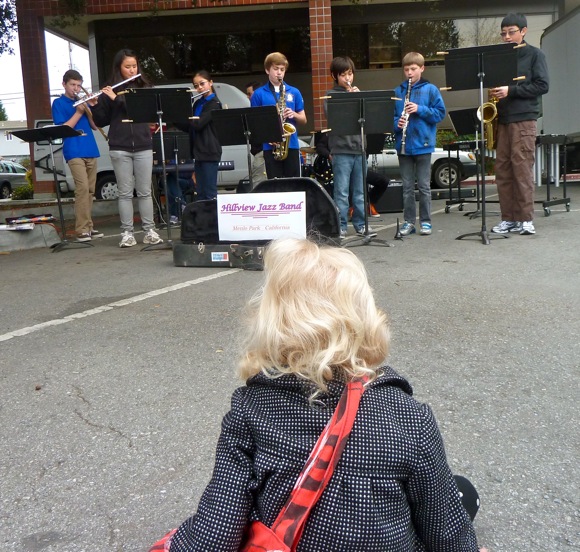 When you’re a group of 6th to 8th graders, your groupies are even younger, at least that seemed to be the case this morning at the Menlo Park Farmers Market. The Hillview Jazz Band was playing and one preschooler plopped down front and center to listen.

There are two Hillview Jazz Bands – the Baker Band and the Jelly Roll Band, both led by music teacher Richard Vaughn. We think it was the Jelly Roll that was performing this morning based on the instruments. On the school’s website, Vaughn explains he formed two groups based on solo experience and the desire to balance both groups, especially with regards to the rhythm section. “The positive aspects of this are that both bands will have similar performance opportunities,” he continues. “We will be playing many of the same pieces, students who haven’t gotten the chance to work on soloing will now be able to do so and all of the rhythm players will be more involved.  I view this as a win-win-win-win.”

Both the Hillview Jazz and Concert Band, along with the La Entrada School Band will be performing with the M-A Band on Wednesday, March 23 at 7:00 pm at the Performing Arts Center.