A peek into the world of the Menlo Library Moles 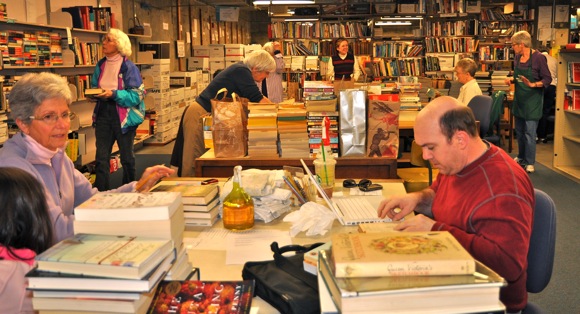 There may be hundreds of Menlo Park Library friends and supporters, but the “Moles” are the 30 or so people who actively sort and price books, run the bookstore, and organize mini sales and the annual Book Fair in September. Reports Friends of the Menlo Park Library member Betty Meisner, “Some of them have volunteered for 20-plus years, some help five days a week, and many are 80+, which to me is all the more amazing!”

We stopped in to see the Moles at work, in advance of the Spring Book Fair on Sunday, March 20 from 12:00 pm to 4:00 pm. On sale will be fiction, mystery, literature, biography, history, religion, gardening, home improvement, cookbooks, children’s, and young reader’s titles, as well as hundreds of unique books. 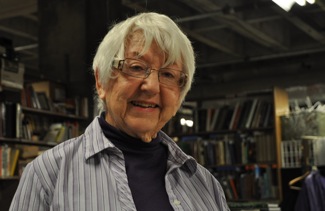 Jackie Drew (pictured left) has been a Mole since 1987, the year she retired from the Library’s circulation desk. In mole-like behavior she moved from the light-filled upstairs to the downstairs sorting and storage room, where she is in charge of collectible books.

“They just come in, often we don’t know where from,” she says about the collectibles. A recent example was a 4th edition of Samuel Johnson’s Dictionary which sold for $1,000 at the PBA Galleries in San Francisco, with proceeds going to the library.

The Moles agree that Jerry Stocker is “chief Mole.” “When in doubt, ask Jerry” might be thought of as the Mole mantra.

It’s the Moles who gather the free books that are put on a cart just outside the library doorway, weather permitting. They also select the books that are sold on Amazon, an effort that has brought in additional funds.

Sums up Betty Meisner: “Moles are truly the working arm of the Friends of the Library.”

The Moles are the unsung heros of our library. Without their efforts our community would not benefit from the wealth of children’s programming that is offered at both our main and branch libraries.

My hat is off to these dedicated community minded people they all make a tremendous positive impact to our community.

Love the Friends of the Menlo Park Library! Awesome group of people doing some great service to the Library and our whole community! Thank YOU!