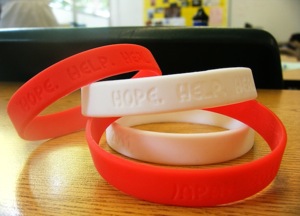 Although the people of Japan suffer firsthand the damage caused by the recent earthquake and tsunami, these natural disasters have also swept the small, yet patriotic population of Japanese Americans here at Menlo-Atherton High School.

“The first thing I saw was a car, moving as fast as it can, being engulfed by a giant brown wave and disappeared,” remembers freshman Stan Kuboi.  “This was shocking to me, knowing that there was somebody in that car, desperately trying to escape.”  He would later learn about the immense death toll created by the tsunami.

“No country should have to endure the devastation that the tsunami inflicted on Japan,” says junior Sean Kelley, a citizen of Japan who regularly visits the country.

As the death toll rises, relief funds and supplies continue to pour into the country from all over the world.

“Me and a few of the Japanese people at M-A gathered up and began collecting donations, selling wristbands and such,” explains sophomore Marina Ikeno.

Kuboi, who originally thought of the idea to start selling wristbands at M-A, estimates they have made more than $7,500, all of which will go to the Red Cross.
The damage done to the country and its people, however, is so extensive that, “this is the first time Japan actually accepted donations and help from other counties,” states Ikeno.

“I felt like I needed to do something,”comments senior Kenta Muraoka, one of the students who also helped sell wristbands. “I felt really heart-warmed when I saw people donating money and supplies to Japan.”

Senior Laurin Noguchi felt similarly, and says, “the relief efforts are astonishing; it seems as if everyone in the Japanese community is coming together to organize some sort of a fundraiser.”

Fortunately, none of the students’ immediate family members were injured in the quake or tsunami. Still, the death toll is horrific, and the customarily astute country is in shambles. Yet there is “Hope for Japan,” as portrayed both at M-A and around the world. M-A’s Outreach held the “Fold a Crane” event, and made $550.

“My Japanese school friend held a benefit concert, Cupertino High School is holding a Japanese cultural festival in May, and dozens of schools in the Bay Area are fundraising for the relief by selling lanyards, bento boxes, t-shirts, etc,” continues Noguchi.  Other M-A students have also taken part in further arrangements to aid the relief efforts at their Japanese schools.

“It is selfless actions like these that will help Japan on its road to recovery,” concludes Kelley. The recuperation will take time, and people around the world, including M-A students, should continue to support the disaster-stricken country.