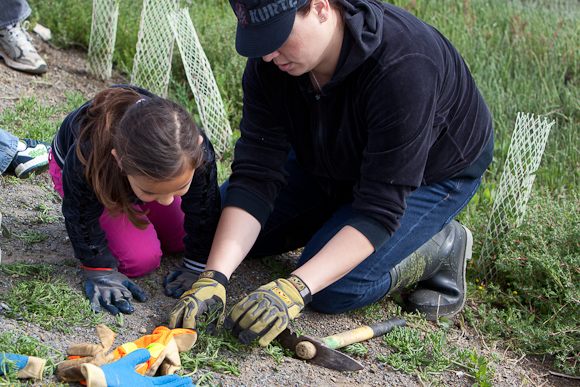 About 80 volunteers gathered this morning at the Ravenwood Salt Ponds in Menlo Park to weed, restore and clean up the area along the San Francisco Bay – all part of Earth Day/Week/Month celebration. The event was sponsored by Save the Bay in cooperation with the U.S. Fish and Wildlife Services and the South Bay Salt Pond Restoration Project. 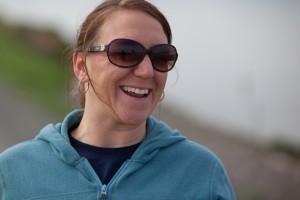 “It’s also unique compared to other restoration sites. It is being restored specifically to create water fowl habitat, using clumps – island mounds of mud. That also makes it very visible to people who are driving by as they approach the Dumbarton Bridge, which we think is good!”

The work underway this morning included weeding ice plant, an invasive non-native species, and picking up trash. “We caged some native plants when they were planted some months ago and they’re ready to be freed,” said Laura. “It’s exciting to remove the cages on Earth Day!”

Dan Glaze was there with his wife and six-old-daughter (pictured top) along with his three-year-old son, who he figured was old enough this year to participate in a community volunteer activity. “We wanted to start a new Earth Day family tradition,” he said. 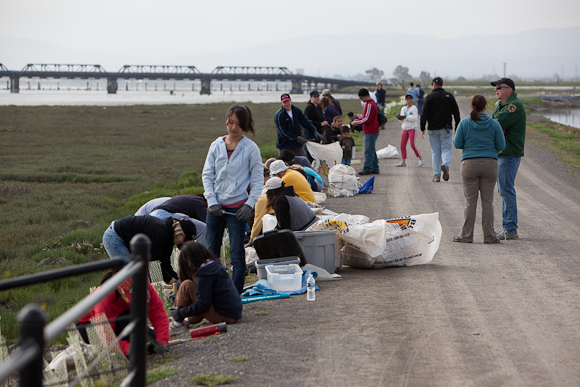 Coincidentally, Save the Bay is celebrating its 50th anniversary this year and it’s all thanks to three very bold East Bay women – Kay Kerr, Sylvia McLaughlin and Esther Gulick, who the organization’s website says “were watching the Bay disappear before their eye” and decided do something about it. They “set out to stop the City of Berkeley’s plan to double in size by filling in the shallow Bay off-shore. They mobilized thousands of members to stop the project, and their resounding victory was repeated on Bay fill projects around the region.”