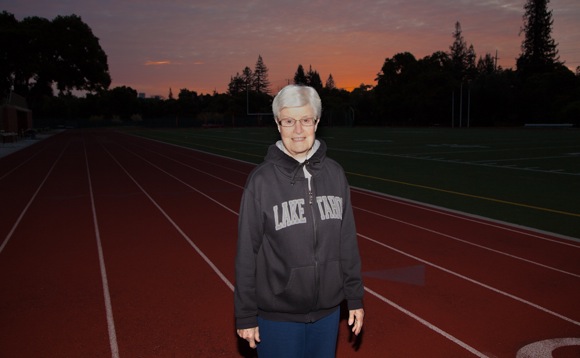 Ask Sister Nancy Morris about her life and she has one word for it: charmed. “My life has been wonderful,” she says, recalling duties and people that span her 60 years in religious life. “I’ve done everything I wanted to do. God has been incredibly good to me.”

That’s not to imply that Sister Morris has stopped doing. Weekdays she can be found at daybreak on the Sacred Heart School (SHS) track where she walks a mile and climbs up and down 314 steps. Then it’s off to St. Raymond School, where she works on fund raising and communications. Unlike other sisters her age who live in the Oakwood facility on the SHS campus, she’s not retired so shares housing with three other sisters. “They’re tearing our house down but building us a new one,” she quips. “That’s lovely.”

Sister Morris grew up in Piedmont across the Bay. She describes her father as a “committed Catholic.” All four of her brothers took religious vows — only her younger sister did not. Years later, she’s the only one who is still in religious life. “When I graduated from Berkeley — where I was a Kappa, by the way — and told my parents that I was going into the novitiate, my mother wept while my father rejoiced. Little did she think then that she would end up with 22 grandchildren!”

While Sister Morris taught a few years, most of her vocation has been in administration. She was Head of School at Sacred Heart from 1971 to 1989 and before that president of the women’s college at the University of San Diego. “I like to think I helped bring the men and women’s colleges together as one entity,” she says.

In addition to her track routine, she loves hiking and quickly lists every Bay Area peak on her conquered list as well as most of the trails on the Peninsula. “It’s the way to be out in God’s country,” she says. “All the trails around here are wonderful, although I still like going up and down Windy Hill the best.”

When Sister Morris took her vows in the  Society of the Sacred Heart, which was founded in 1800, she and her fellow nuns wore full habits. Post-Vatican II, they shed the traditional habit for a simpler one. Now, they dress in street clothes. Where once monastic, they are now fully in the world. “There’s part of me that laments the end of the monastic order,” she says. “But early on I really learned how to pray and that’s sustained me. And what  a wonderful life I’ve had meeting and working with so many incredibly gifted and talented women. I am blessed.”

Sister Morris exudes the Gifts of the Holy Spirit………

Our family was so lucky to have her and It was always a JOY to work for Sacred Heart. When the nuns pray miracles do happen.

Sister has the voice of an angel . I cherish the memories of Christmas Eve Mass at the chapel.

God bless Sister Morris. After seeing this she still inspires me from my childhood 30 years ago.