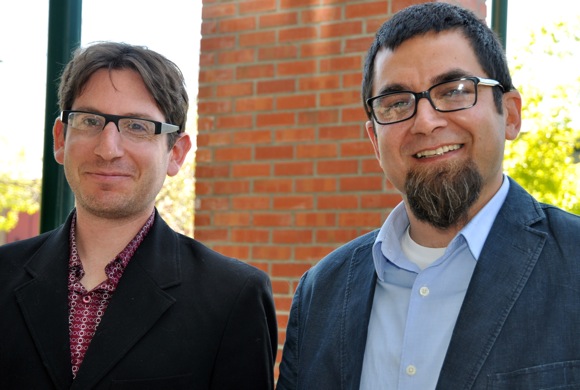 Composers Alex Sigman and Jason Federmeyer, who became acquainted at Stanford while getting their doctorates in musical composition, surveyed the mid-Peninsula after they’d completed their studies and came to some conclusions: There was a lot of demand for culture, although culture wasn’t always in abundant supply. The area was the center of experimentation and innovation, but that didn’t extend necessarily to music. And high school students, in particular, were not being exposed to 20th and 21st century artists.

So with encouragement from Menlo-Atherton High School and the City of Menlo Park — and the financial support of local entrepreneur Jeff  Smith (founder of music app developer Smule) — they launched the Menlo-Atherton Academy of Contemporary Music. Its unique mission is to put on semi-monthly concerts, lecture-demonstrations, and workshops by guest composers, performers, and sound artists.

“The Academy was founded so that Sequoia Union High School students could explore and engage in contemporary classical music,” said Jason. “Neither of us were introduced to this music until we were in college. And using the combined performing/workshop format, there’s a high degree of interactivity. Alex and I have discussions with the audience after every two or so pieces are performed. The idea is to make it a more visceral experience.”

The last program of this season is on Sunday, May 15, featuring sfSound with Kyle Bruckmann on oboe and Christopher Jones on piano performing a program of music by Luigi Nono, Luciano Berio, Harrison Birtwistle, Brian Ferneyhough, and Earle Brown. The concert is from 2:00 pm to 3:30 pm at the Menlo-Atherton Performing Arts Center; the workshop is  from 4:00 pm to 6:00 pm in M-A classrooms. Tickets are $10 general admission, $5 students with ID, and free for Sequoia Union High School District students.

Both Alex and Jason are quick to point out that not all performances will be strictly musical; electronics, video, and sound sculpture will also be incorporated. “What it all has in common is an experimental approach,” said Alex. “It’s music that was taking risks when it was composed.”

As they make their way through the pilot season, they hope to attract kids from a variety of performing arts and build an artistic community. “The kids come with enthusiasm and the energy to explore,” said Jason.

More information about the Menlo-Atherton Academy of Contemporary Music, including how to donate, is available on the organization’s website.

Tickets for all students w/ ID are actually *free* for this event. :->