“From Afar” in Ethiopia is SLAC Colloquium on May 9 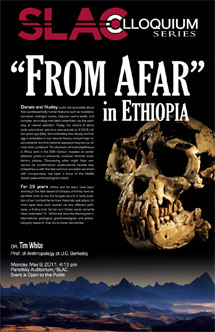 Dr. Tim White, Professor of Anthropology at U.C. Berkeley will by at the next SLAC Colloquium on May 9 titled From Afar. He will detail his team’s decades of work in Ethiopia, unraveling the story of human evolution.

Darwin and Huxley could only speculate about how quintessentially human features such as bipedal locomotion, enlarged brains, reduced canine teeth, and complex technology had been assembled via the pathway of natural selection. Today, the record of stone tools and animal butchery now extends to 2.5-2.6 million years ago (Ma), demonstrating how deeply technology is embedded in our natural history, and perhaps responsible for the first hominid expansion beyond our African birth continent. The discovery of Australopithecus in Africa early in the 20th Century revealed an earlier adaptive grade — a previously unknown hominid evolutionary plateau. Discovering what might have connected the small-brained, small-canined, bipedal Australopithecus with the last common ancestor we share with chimpanzees, has been a focus of the Middle Awash paleo-anthropological project.

For 25 years, White and his team have been working in the Afar desert of Ethiopia, and they have assembled what is now the longest record of early evolution of our hominid family tree. Hominids and extant African apes have each evolved via very different pathways, a finding that Darwin and Huxley would certainly have celebrated. Dr. White will describe the long-term, international geological, geo-chronological, and paleontological research that led to these discoveries.

The talk, which takes place in Panofsky Auditorium at SLAC, is free and open to the public. It begins at 4:15 pm.