KFJC Battle of the Surf Bands comes to Menlo Park 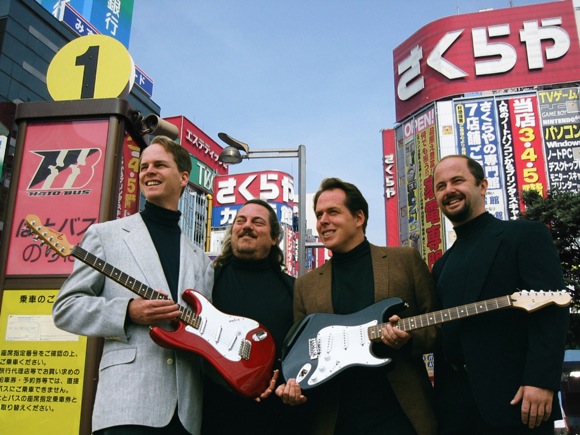 The sounds of the beach come to Menlo Park today (5/14) when radio station KFJC presents the fifth annual Battle of the Surf Bands. In keeping with the tradition of the legendary surf battles of the early 60s, bands are given 15 minutes to present their best material and stage show. Sixteen bands will be competing over a four-hour period beginning at 1:00 pm at the British Bankers Club.

The band battle tradition goes back decades. During the golden age of surf music in Southern California, Los Angeles radio station KFWB held monthly dances for teens featuring local surf bands like The Chantays, The Surfaris, The Bel-Aires, and hundreds more. These bands would become known as the fathers of the surf rock sound, recording hits like Wipe Out, Pipeline, Penetration, Mr. Moto, and Miserlou. In 1963, Del-Fi Records released an LP featuring the best bands from the KFWB Battle of the Surf Bands series.

Today bands continue to create and perform surf music. Though Los Altos Hills’ KFJC is known for it eclectic playlist, the station has long been dedicated to instrumental surf music. Many DJs regularly include surf cuts on their shows, and DJ Cousin Mary’s show, “The Reverb Hour,” runs weekly on Saturday nights at 8:00 pm. 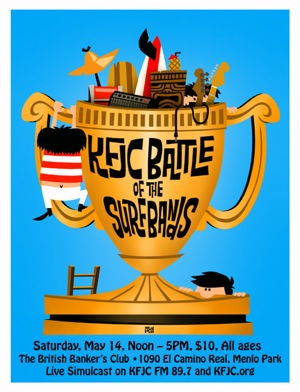 To those who might say, “all surf music sounds the same,” the Surf Battle lineup displays the variety available in the genre. There are trad bands (those who adhere strictly to the vintage sound) and prog surf (bands who have pushed the sound beyond). For Aloha Screwdriver, this will be one of their first shows, while The Berzerkers have been playing for 20 years. This will be the curtain call for The Eldorados.

Most of the bands are local to the Bay Area, but The Mighty Surf Lords will be representing Reno, NV and The Neptunes are coming in from Fresno. Some of the bands only play locally, while Pollo Del Mar (pictured above) has staged several international tours. Two of the bands have promised new releases, and others will have homemade CDs for sale. Bands like Meshugga Beach Party feature an outrageous stage show while other bands rely on jaw-dropping chops to awe the crowd. Some of these guys gig all the time, while The Lava Rats have been dormant for a couple years and are re-forming just for this show.

One thing all of the bands share is a passion and dedication to surf music. “When you are playing in such a vastly unpopular genre as instrumental surf, a sense of camaraderie, or perhaps a bunker mentality, is sure to form amongst the musicians,” said event producer and guitarist for Pollo Del Mar, Ferenc Dobronyi. “The KFJC Surf Battle is a chance for all the bands to get together and share tips on surf friendly venues, see old friends, and have a party.”

The Battle of the Surf Bands show is a benefit for community-sponsored KFJC radio. The $10 door charge and all profits from sales go directly to helping fund the station. The bands are all contributing their performance to support the radio station that has supported them over the years.   Doors open at noon; music from 1:00 to 5:00 pm.  All ages welcome. The British Bankers Club is located at 1090 El Camino Real in Menlo Park.

Berzerkers around for 20 years

Thanks foor finally writing about >KFJC Battle of the Surf Bands сomes to Menlo Parrk — InMenlo
<Liked it!