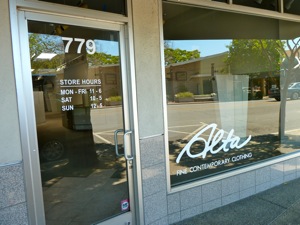 Alta locked its doors for the last time on Friday, May 6, the third store offering mid-priced women’s clothing to be shuttered in downtown Menlo Park during the past four months. In the case of Alta, three other locations were closed the same day.

When Boutique 4 closed in February, co-owner Tamara Michel told the Almanac News that their Mountain View location on Castro St. would remain open. She said that business conditions in downtown Menlo and the tough parking restrictions prompted were behind the decission not to renew their lease. A Subway is replacing replace it.

Hi,
I’m so sorry to see Alta go but thought I’d post the stores I really like that are ‘kin” to Alta. First there is now “Holly Hill” where Alta was in San Carlos. The former store manager of Alta owns and manages this new chic location. Secondly, if you are missing Alta, try the “Yum Yum Tree” in Los Altos, one of my very favorites!